Posted on February 20, 2014 by DisneyDawnMarie

The next morning we all woke up so refreshed and excited to start the day.

We arranged with concierge to bring Mike coffee daily- but he woke up before they arrived, so he went and took a short walk to grab himself a cup. Tricia and another friend, Kristin, strolled down from their stateroom to ours to watch us pull into Nassau, Bahamas from our balcony- it was a gorgeous morning. 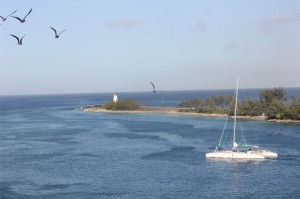 We had decided since it was only a 3 night cruise, we would stay on the ship to enjoy the amenities on board instead of venturing out to Nassau (we have visited before). It was still early after Tricia and Kristin left, so we decided to head to the new Cabanas for a late breakfast.

On the way, we stopped at one of the bars and bought 3 Disney Frozen cups for the kids that featured Olaf. This is a HUGE cup that the kids would refill throughout the cruise at the drink stations (ONLY using the paper cups to refill the larger cup as to not spread any germs). They were a huge hit and these cups often sell out early in the cruise- if you are cruising soon- try to grab one sooner rather than later once on board. 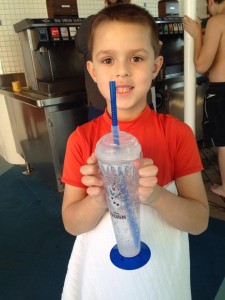 Personally, I LOVE the way Cabanas is set up vs. Topsider Buffet that was the previous buffet option on the Disney Magic. Cabanas has stations vs. Topsider Buffet rational buffet line. Most of the food options are the same and traditional breakfast options- Mickey waffles, eggs, sausage, bacon, pastries, bagels, etc.  Again, the customer service on the Magic is unparalleled. We sat down with our plates and immediately one of the cast members came over and chatted with the kids about their cups, told a few jokes, and really made breakfast enjoyable.

After breakfast we headed to deck 10 to grab some deck chairs in the sun within view of the Goofy’s Family pool, Funnelvision, and Aqua Dunk. Now, we settled in for the day. It was warm- low 80s- and the kids had fun going back and forth from the Goofy Pool, Aqua Lab, Twist and Spout, and Aqua Dunk. Mike and I did ride the Aqua Dunk once- and it was once one and done for us. 😉 The 3 story free fall slide had me screaming the entire ride down! By the family pool there are family trivia games and Disney movies played all day long. There are servers that will come to your deck chairs to bring your drink orders right to you. For lunch we sampled from the counter service options available- Daisy’s De-Lites (salads, wraps, sandwiches), Pete’s Boiler Bites (burgers, chicken fingers, French fries), and Pinocchio’s Pizzeria. It was a wonderful afternoon! 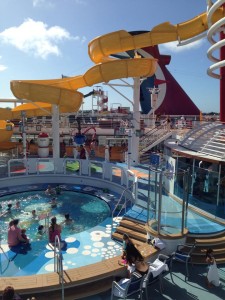 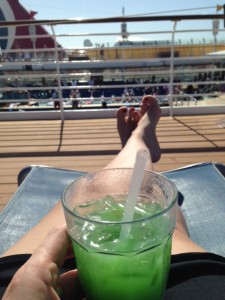 We left the pool area around 4:30pm so we can get ready another Concierge Reception in Keys- and this time Captain Hook was there to greet us- it is Pirate Night! 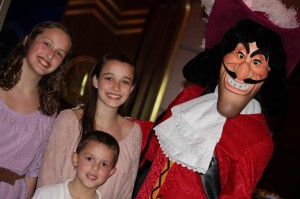 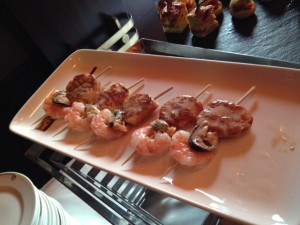 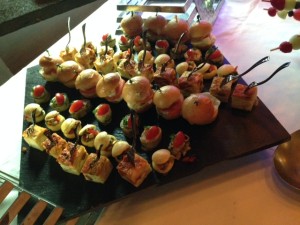 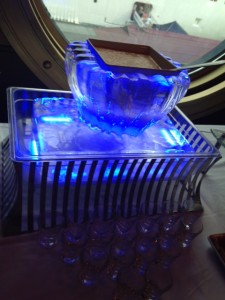 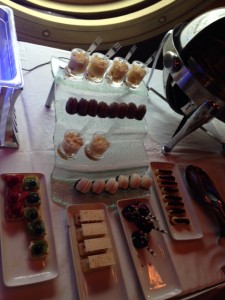 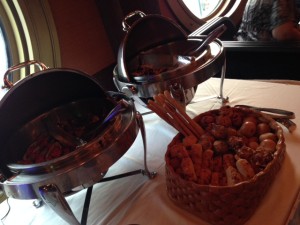 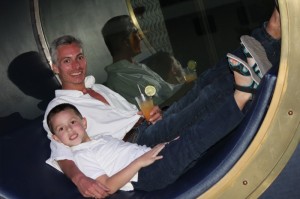 After the reception we headed straight for Villain’s Tonight-one of the 3 Broadway style shows that would be performed during our cruise (we missed Twice Charmed the night before). We met Mikey’s friend and his parents at the show as well- they spent the day at Atlantis in Nassau. All 8 of us thoroughly enjoyed the show which does not disappoint. Singing, dancing, and lot of giggles from the adults and the kids! 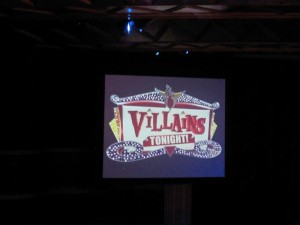 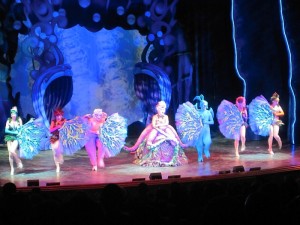 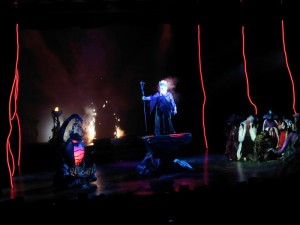 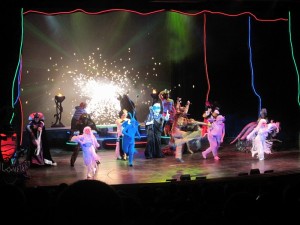 After the show we all headed to the shops! The one disappointing thing about the cruise was this area. I felt there wasn’t much variety as there was on the Fantasy. I was hoping to buy more plates from Animator’s Palate (I had bought only 1 on the Fantasy in August), and they are not available on the Magic. There also didn’t appear to be as many Cast Members available to help on the shops’ floors or at the check out desks.

After shopping we headed to dinner at Animator’s Palate. We LOVE it there- and now it has been Re-Imagined! 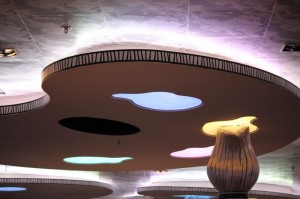 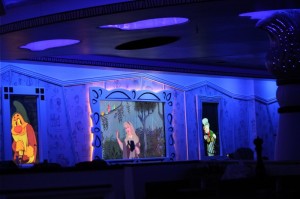 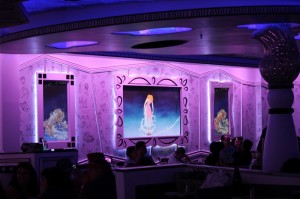 We really enjoyed the new show, the servers were fantastic as usual, our there even was a visit from Mickey Mouse! 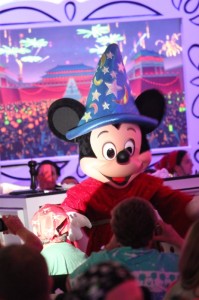 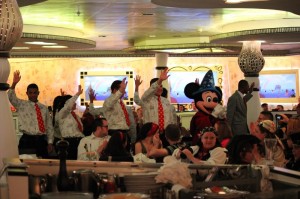 The ship’s photographers also visited us during dinner… 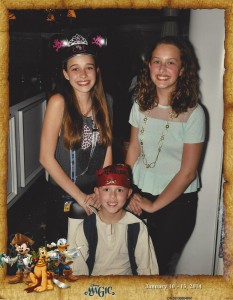 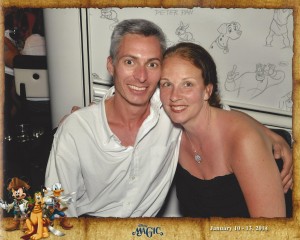 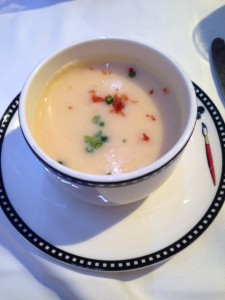 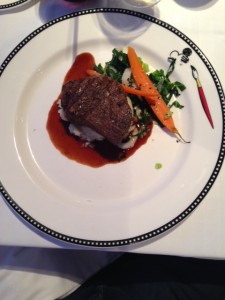 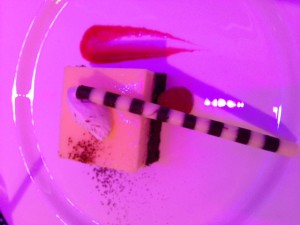 Hart and Tomasina also brought me something special to celebrate my last night in my 30’s! 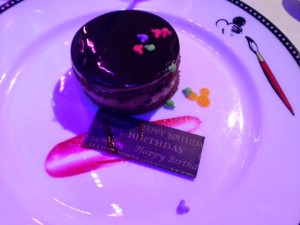 After dinner we went to our stateroom in hopes to enjoy the Pirate Night fireworks from our balcony- not quite the same as enjoying it from on deck, but it was still special. After the show we tucked everyone in to bed, dreaming of Castaway Cay the next day! 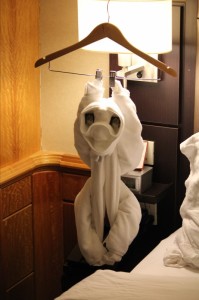