We had such an amazing day, we really didn’t want it to end- I cannot say it enough! The boys decided they needed to hurry and wash up once on board because the Avengers Academy in the Oceaneers Club was early that evening for an hour and they both wanted to go. This was great because it gave us time to wash and pack up too!

Before we got on board, we had decided to order in dinner. Staying in a suite, we are able to order dinner from the main restaurants and have it delivered to our room- we just all have to decide on the same restaurant. The night before we were in  Animator’s Palate so we asked for the menus for Cariocas (where we had lunch when we first boarded) and Lumiere’s (where we had dinner on the first night). We decided on Lumiere’s for appetizers and entrees and then we would head down to Cariocas for dessert to say goodbye to Hart and Tomasina. 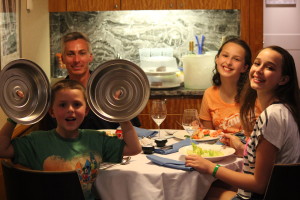 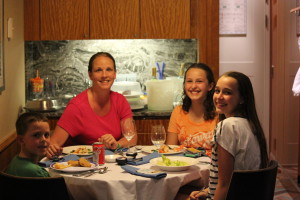 After dinner, the 5 of us strolled around the ship, taking everything we could in. We had a wonderful weekend- and it flew by so fast. It certainly took the sting out of turning 40. 😉

The next morning we had an early flight, 11am. Generally- after a cruise we don’t fly that early but the next flight was too late for us and our driver, Tony Hinds, assured us he could get us to the airport in time for our flight- and he did! We carried our own bags off the ship instead of leaving them out the night before. We were also lucky enough to have breakfast delivered to the room again- another perk for staying concierge (one could really get used to this!) so we were well fed as well.

What did we learn from this trip? Concierge is WORTH EVERY PENNY, especially on a short trip like this one was. We were greeted as soon as we got to the Beach Club and we were whisked away to the lounge for drinks and snacks- which was something we truly needed after being delayed in New York. They doted on the kids and made sure they were just as comfortable as we were for the night. We boarded the Disney Magic as soon as we got to the port, and that was after we took our time at Beach Club concierge having breakfast in their lounge. The extra room we had for the 3 nights for our family of 5 was priceless in our suite. We purposefully spent a lot of time in our room and balcony to really enjoy staying in one, which truly is a treat. Any time we had a question or concerns Angeline and Tawanda (the concierge Cast Members) were ready and willing with an answer or would be prompt finding it out for us. They would have been able to change our dinner rotation if we were unhappy with our dining time as well. They could book Palo if we needed, wine and beer tastings, etc. During the cruise they delivered goodies to our room (fruits, cheese and crackers, cookies for the kids, chocolates, etc) without us having to ask- but it seemed to be just what we wanted at the time. The cabana on Castaway Cay was AMAZING. It will be really hard to visit without having one now! We now know and understand why they are a really tough excursion to book and are so grateful we had one on this really special trip. We would be hard pressed as to come up with 1 thing we would change that weekend other than having time move slower. Time really does fly when you are having fun! 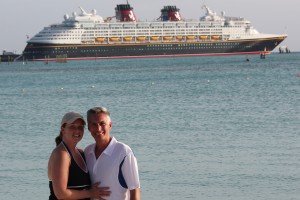