A Fairytale On The Fantasy; A Trip Report- Tortola & Pirate Night

Posted on September 22, 2019 by DisneyDawnMarie

On our third day, we arrived in Tortola, which is an island we have never been able to visit before. We chose the Swim and Snorkel excursion via Disney Cruise Line that will left the D Lounge at 12:45 pm, so we were able to have a late breakfast in Cabanas before heading off the ship. 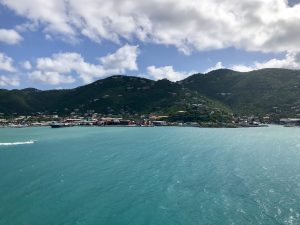 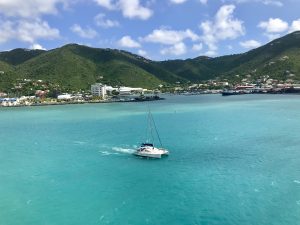 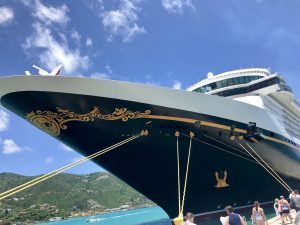 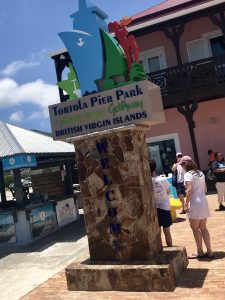 The Rebel Yell, a 57-foot, double-decker catamaran, was docked in the same port we were- so a very quick and easy walk to board. 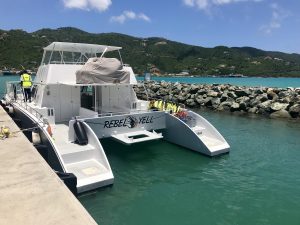 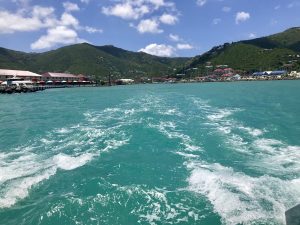 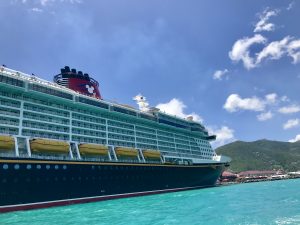 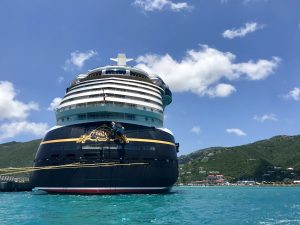 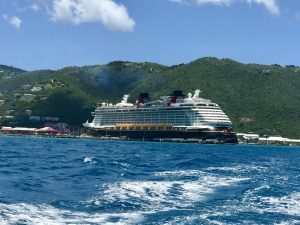 We cruised approximately 30 minutes across the Sir Francis Drake Channel to one of the British Virgin Island’s prime snorkel sites filled with caves to wander in and out of.
The cave furthest to the south once contained a horde of treasure and the reputed history of piracy on this island is immortalized in Robert Louis Stevenson’s famous book Treasure Island. We were all very impressed and excited to snorkel here and we loved every minute. We didn’t find any treasure but plenty of sea life and reefs to explore. 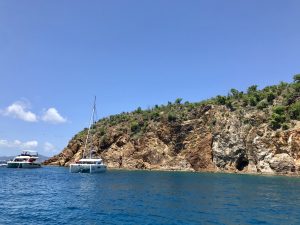 After about an hour, our catamaran captains signaled us all back onboard and we sailed maybe another 15 minutes into Pirates Bight.  Here we had about 90-minutes to snorkel from the beach or simply relax. Not going to lie, we were a tad disappointed the restaurants and shops on the beach were closed for the season (this was mid-August) at first. That said, this turned out to be our FAVORITE snorkel site of the trip! We saw several sea turtles who were so friendly they came close enough to touch, so many different types of vibrantly colored fish, and the water was absolutely crystal clear. 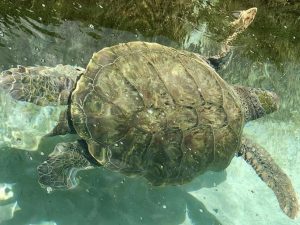 This was such an amazing excursion, I cannot recommend it enough to families who love to snorkel. The snorkel gear is provided for you and the waters were warm, clear, and calm. I am sure you might be able to charter one of their catamarans during your next visit to Tortola- but I would highly suggest you  try to reserve your spot quickly as, obviously, they work with cruise lines and the experience we had was terrific- the secret is out. 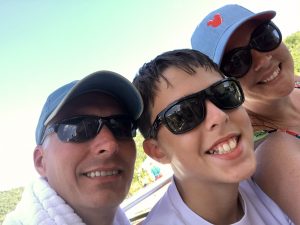 Back in board we headed to grab some food and back to our staterooms to shower and get ready for dinner. Tonight was Pirate Night and we wanted to take a few pictures before dinner as well. 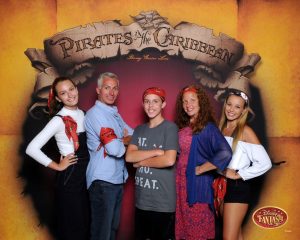 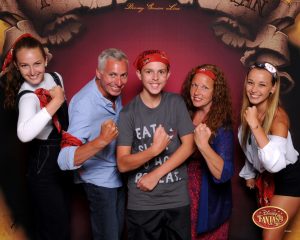 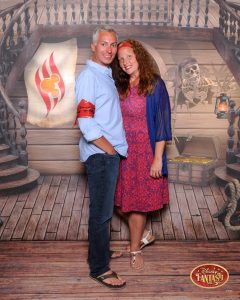 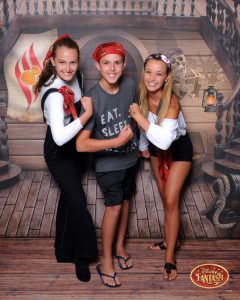 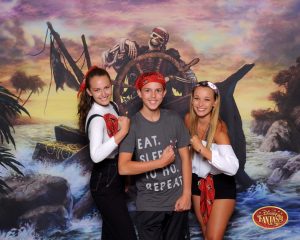 Tonight, we have dinner in Animator’s Palate. We LOVED the theming inside! The images on the screens changed all through dinner with different, family friendly, pirate scenes. 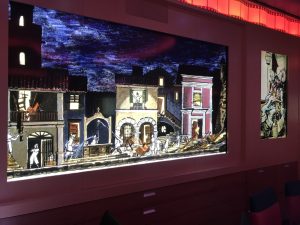 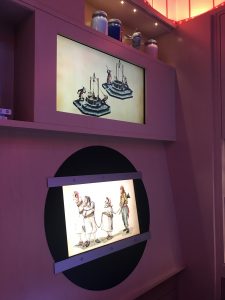 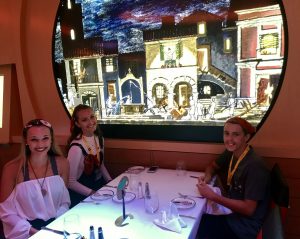 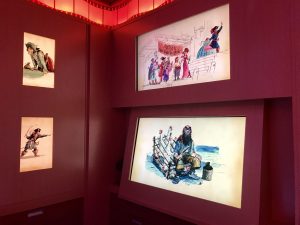 In all fairness, this is usually not our favorite menu. But, the food onboard this week was so good- we had high hopes and we were NOT disappointed!

We started with Black Beard’s Jumbo Crab Cake – with a golden raisin-carrot and coconut slaw served with a spice Calypso dressing. Jacqueline, Mikey, and I weren’t fans- but all that said- we had never tried it before and typically aren’t seafood fans. Mike and Katie ate theirs and some of ours too. 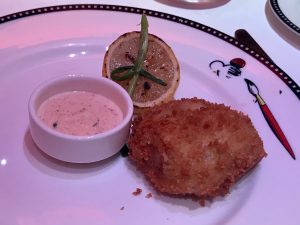 For dinner, I had Tia Dalma’s Jerk Chicken which is a 48 hour Jerk-Marinated Chicken, Grilled and served with Rice and Peas, Fried Plantains and a Pineapple-Chili Salsa. I have to say- I finished it all, it was actually more than pretty good… 😉 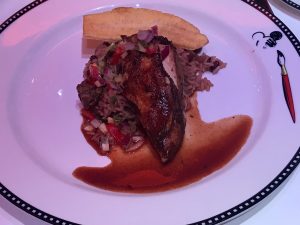 For dessert, I had the Caramel Macadamia Nut Cheesecake Tart
served with Whipped Cream and Caramel Ganache- oh, so good! 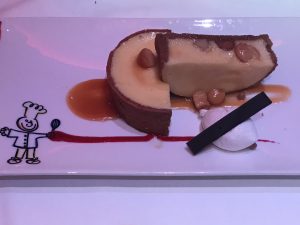 Next up, Pirate Night! By now the entire ship was feeling festive! 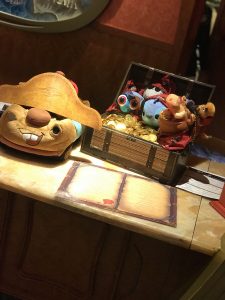 We headed up to our usual, deck 12, for the party… 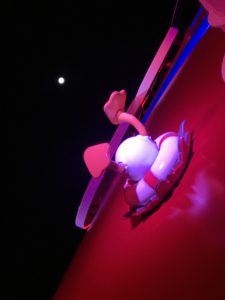 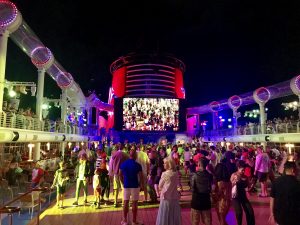 This was an incredibly full day and we were exhausted! We skipped the buffet and headed to bed. Tomorrow would be another day of snorkeling… 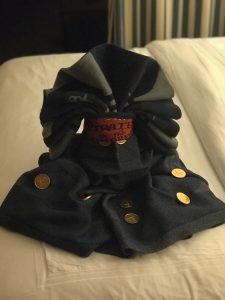