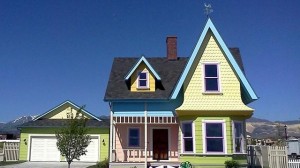 Self-described Disney and Pixar fans Clinton and Lynette Hamblin of Petaluma, California are moving into a $400,000 home in Herriman, Utah, that is an exact replica of Ellie and Carl’s house from the movie “Up”  on Saturday.

Like Ellis and Carl in the movie, the Hamblin’s say they also have a strong and loving relationship and share a fascination for anything Disney. Clinton says ,”We’re big Disney fans you know even before we had kids we’ve loved Disney we are kind of dorkey like that.”  Lynette continued,“It was about the up vibe in the house. Carl and Ellie had such a love for each other, and like a zest for life, even though they had some downfalls a lot of people across the world can relate to those downfalls.”

The house has blue retro-appliances in the kitchen and  the blueprints for the house were drawn based entirely on details right down to the stenciled front lawn mailbox and light pastel exterior paints.

This entry was posted in Mouse Movies, What We're EARING. Bookmark the permalink.