Posted on November 24, 2017 by DisneyDawnMarie

Traveling from park to park is super quick with a VIP Guide. Bypass security and enter from backstage- right into the center of the park- so, less walking and more time experiencing. Your Magic Bands are scanned backstage before going onstage and in you go.

We arrived at Hollywood Studios to a Cast Member with baskets full of snacks and waters. Which was fabulous as the Florida heat was getting to us Northerners at this point. We walked in just adjacent to Rockin’ Rollercoaster, but we were headed to Toy Story Mania.

Now, I will admit to being ridiculously competitive. I blame it on growing up between two very athletic brothers and a father who was a 20+ year Air Force vet. So, I was paired with one of our guides, Chris, to see how I could do…

Well, he smoked me and I thought I did pretty good! 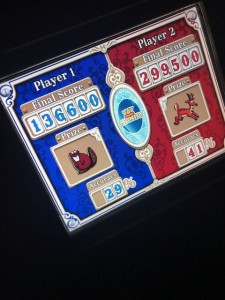 Next it was time for Star Tours, Tricia and I sat out. I just can’t handle the motion and jerkiness of this ride. But, it’s a family favorite ride and this time my oldest daughter was chosen as the rebel spy. I missed it- but that is OK- if I was actually on the ride I would have likely been deep breathing and counting slowly to keep my burger and fries from lunch in my stomach.

Next we strolled over to Hollywood Blvd and took note that the Hollywood Studios Tree is now INSIDE the park! 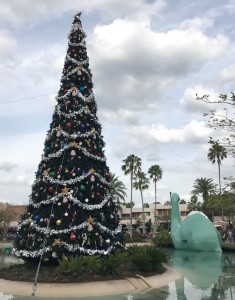 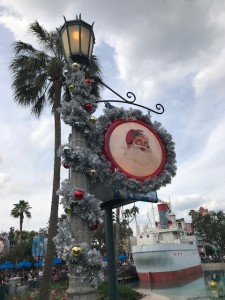 We also happened upon the March of the First Order…

Then we split up (HUGE advantage to having 2 guides). Mikey, Arnie, Jocelyn, and I headed over to Star Wars Launch Bay and everyone else headed to Tower of Terror. Arnie had some shopping to do while Mikey and I really wanted to meet Chewbacca and Jocelyn could help us with that 😉 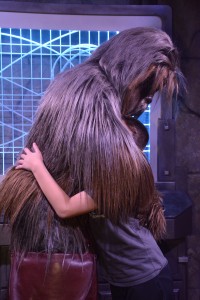 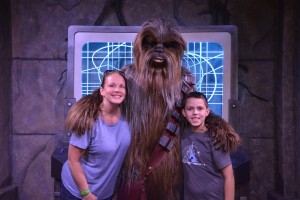 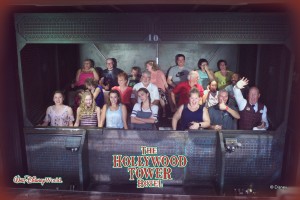 We met up in time for Arnie to ride Rockin’ Rollercoaster and now Mikey, Tricia, Mike, and I sat that one out to do a little Christmas shopping and chat with Jocelyn a bit. 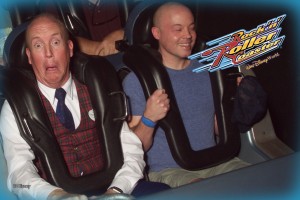 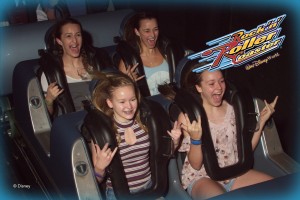 Once everyone was done we headed back to the car, after grabbing some more water and a few more snacks, we were headed to Epcot. Now we had about an hour left of our 7 hours and we wanted to experience 3 major attractions- fingers crossed!

First, we parked behind Soarin’ and quickly rode that. I absolutely LOVE this ride. The motion doesn’t bother me at all for whatever reason.

Next up was Frozen Ever After. Mike and Mikey have never ridden this ride and of all of the attractions we had experienced, this one had the longest Fast Pass line. Which was stressful, but… still an amazing ride!

After Frozen we walked as fast as we could to Test Track, however- it was now time to say goodbye the Chris and Jocelyn. They would be able to get us on the Fast Pass line here, but our time was up and they wouldn’t be riding with us. So, we needed a picture with the kids. In hindsight, the adults should have jumped in too. 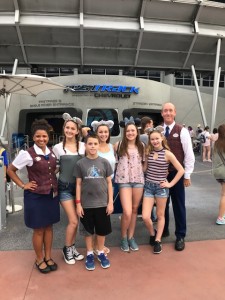 I have to admit, today was priceless- totally worth the pricetag. We paid $245 an hour, for the minimum of 7 hours. The price fluctuates in relation to day of the week (we toured on a Thursday) and time of year. Jocelyn and Chris were so super professional- totally read us well giving us a history lesson throughout the parks as well as entertaining the kids with endless jokes and magic tricks. They made our day so seamless, easy, and fun- we really hated to see them go. I cannot recommend this enough to families, especially larger families or 2 families to help split the cost as we did. We were on a tight time frame, trying to fit everything in basically in 1 day. Tricia and I plan vacations for families every day and there is no way we could have put something like this together for our guests as just our first 90 minutes alone we rode both Pandora attractions AND Kilamanjaro Safaris. That’s near next to impossible unless you line up far before the park opens, and we entered the park after 9am.

We skipped Magic Kingdom as we were headed to freshen up, dinner, then the very first Mickey’s Very Merry Christmas Party!