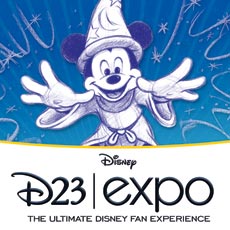 Fans attending Disney’s D23 Expo August 19-21, 2011 at the Anaheim Convention Center will get a preview of the latest details for Walt Disney Parks and Resorts’ 11 parks and five resorts around the world, as well as Aulani, a Disney Resort and Spa in Hawaii, Disney Cruise Line, Adventures by Disney and Disney Vacation Club, including:

On Friday, August 19, Walt Disney Parks and Resorts Chairman Tom Staggs will addresses attendees in a 4,000-seat main arena with an in-depth, behind-the-scenes look at some of the biggest projects currently underway at Disney parks, and promises a few surprises along the way!

Imagineers and cast members who create and operate Disney’s parks, resorts, cruise ships, and other vacation experiences will take fans behind-the-magic with nine exciting presentations including:

Tickets to the D23 Expo are available at http://www.D23Expo.com.  Admission includes access to all experiences and entertainment at the D23 Expo, including the Disney Legends Ceremony, and can be purchased for single days or for the full three days of festivities. Admission is $47 for a one-day adult ticket and $37 for children 3-12. Three-day passes are $136 for adults and $106 for children. Members of D23: The Official Disney Fan Club will receive a discount for up to four admissions, as well as early entry to each day of the D23 Expo for themselves and their guests.