Update below the image! 🙂 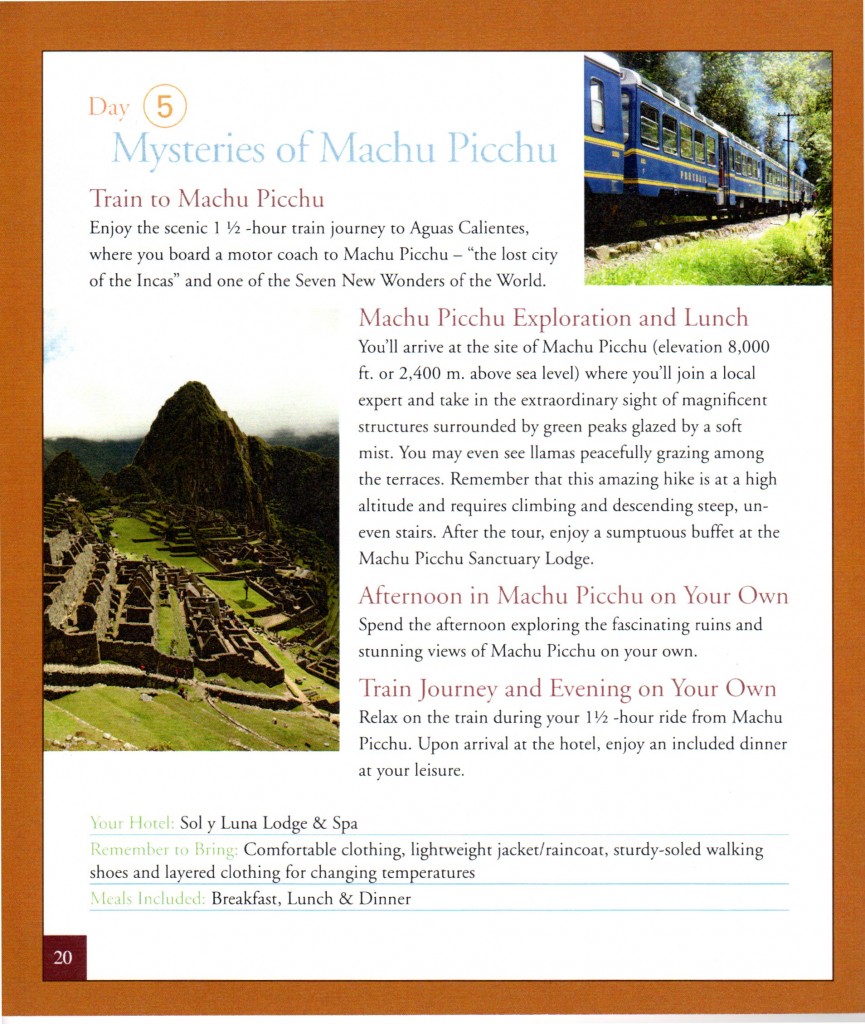 Today was LONG but incredible. We had an early start time. We had to be on the motorcoaches by 6:15 in order to catch the 7:05AM train to Macchu Picchu.  PeruRail was nothing like we were expecting and high class all the way! It was almost like flying as there were attendants and we were offered a snack of a sandwich and fruit with a beverage.

The train ride took approximately 90 minutes. When we arrived we then had to transfer to a bus which brought us up the mountain to the entrance to Macchu Picchu. The ride was about 30 minutes to the site. (Note to anyone susceptible to car sickness – bring along the Dramamine as most bus rides were zig zag roads up the mountains!)

One of our adventure guides, Chris, was feeling quite under the weather with a parasite so he stayed behind to visit the doctor in the health clinic. We’re not sure if it was the swim in the river (he took in some water jumping in) or something he ate, but the boy was an unhealthy green!

Machu Picchu was truly amazing. There really aren’t enough adjectives to describe how beautiful and amazing this place is. The thought that went into the architecture is mind blowing!  The tour was pretty intense and was a bit tough on some of our touring members with bad knees. It was great to see everyone helping each other up and down the stairs, and calling out for uneven pavement.

For the junior adventurers, they were given a primitive book made out of string that the ancient Incas used for keeping track of  crop, taxes, and census of the population.

Lunch was a buffet held at the restaurant right outside Machu Picchu.  Tricia was feeling a bit “off” so she ate very light and chose to skip the hike to the summit and instead went back into the ruins to explore some more. Dawn, on the other hand, went with the thrill seekers and did a 3 hour hike to the summit of the Sungate of Machu Picchu .

We met back at the bus depot for a ride down the mountain. Our train left at 5:30 and we were not only treated to a snack (salad, pasta with tomato sauce) but then a fashion show of clothing available for sale. They had some beautiful, high end clothing for sale.

We had a great dinner back at the hotel.  Dawn had soup, beef tenderloin and a pudding with vanilla ice cream.  Tricia had salad, beef tenderloin and chocolate truffles.  We split the desserts – the pudding was more like a french toast (fried? very unusual but tasted great); the truffles looked like Munchkins from Dunkin Donuts, but had a liquid center. It was served with a mint ice which was tasty when put in the middle of the truffle.

As an aside, we would be remiss if we didn’t mention the amazing agents we are traveling with. Not only are we finding everyone to be extremely friendly, however we have found a few who are willing to give us some advice on on marketing, and building the business.

We are SO grateful for this experience, to explore Peru, and to experience an Adventure by Disney first hand. We are already talking about planning a family trip with both our families!