Posted on July 1, 2011 by DisneyDawnMarie 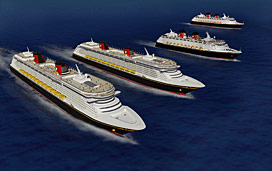 Disney Cruise Line recently announced details about its new  Fantasy cruise ship, sister ship to the recently launched Disney Dream (of both Disney DawnMarie and Disney Tricia
both sailed BEFORE the actual maiden voyage). While both will be 128,000 tons and carry up to 4,000 passengers, some sizable differences that make the two ships more like cousins rather than sisters.

Exclusive to Fantasy include:

While Disney Dream’s version of the Animator’s Palate restaurant show has a dining-in-an-aquarium feel (featuring the talking turtle Crush from Finding Nemo fame), Fantasy’s  will be a full dinner show inspired by food-themed moments from Disney Pixar  films, plus animated drawings created by passengers themselves during dinner.  Who will receive a placemat with instructions on how to draw a character. The drawings will be collected at intermission, taken behind the scenes, where they’ll become fully animated to dance alongside classic Disney characters in the show’s finale, complete with guest names in the end credits!

The Fantasy will also have her own Disney Musical excusive to her, Disney’s Aladdin:
A Musical Spectacular . This Broadway style show will feature Aladdin, Genie and Princess Jasmine, plus scenes and songs from the movie that include a “flying” carpet that can turn and pitch as Jasmine and Aladdin soar above the stage.

Fantasy’s adults-only Europa Nighttime Entertainment District will have the same layout as the one on Dream, but with a European theme. Bars and lounges will include the Italian-themed La Piazza, complete with Venetian masks and a classic Vespa with a sidecar, and Ooh La La, a bar turned elegant French boudoir with velvet-tufted walls and Louis XIV-style chaises.

Lastly, the new Bibbidi Bobbidi Boutique — part salon, part store — will transform kids into young princesses and pirates (similar to the Boutiques found in Walt Disney World). A “fairy godmother-in-training” will oversee each makeover; packages will offer various combinations of hairstyle, makeup and nails. Princess costumes, complete with crown, wand and shoes, will be available.  Boys and girls — and even adult pirate wannabes  on Pirate Night — can visit the boutique to get decked out with beards, bandannas, swords, scars, earrings and even eye patches!

Guests who have sailed on the Dream will recognize the water-coaster, AquaDuck; Remy, the pricey ($75 per person) alternative French restaurant named after the main chef  of Ratatouille; and the inside staterooms with Magical Portholes, which provide a peek at
what’s going on outside via framed portholes with video feeds from the ship’s exterior and a few favorite Disney characters swimming by every half hour.

You can check out a time lapse of the ship being built here: DisneyFantasy

This entry was posted in Disney Cruise Line, Mouse Masts. Bookmark the permalink.