Disneyland: A Quick Look at the 3 Disneyland On-Site Hotels 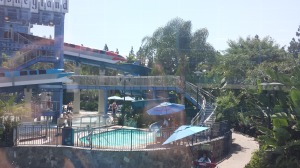 The Monorail Pool area is a blast for both young and old.

The Paradise Pier is located the furthest from Disneyland and California Adventure.  It, too, offers guests upscale accommodations but does have a more “traditional” hotel feel than the other two hotels with the pool being located on the top floor.

In terms of room size, the rooms at the Disneyland Hotel tend to be larger.  And, the “touches” that they added to the rooms are really nice. The design, especially in the bathroom is sleek.  Here you will find Mickey Hands holding the light. The water faucets on the bathroom sinks also sport a hidden Mickey.  Here is a hint … look at the handles. And, if you look really close you will find some hidden Mickeys on the shower tile and even the carpet.  Each tower has a special name and the artwork found in the rooms in that particular tower supports this theme.  One of my favorite things in the rooms at the Disneyland Hotel is the Headboard. With the switch of a button, you will find magical fireworks in the headboard (which is the castle) and a tune to go along with it.  Truly this is magical, whether you are an adult or kid.  The grounds are also very nice with magical touches throughout.  The Disneyland Hotel is unique with no comparison to any hotels at Disney World. 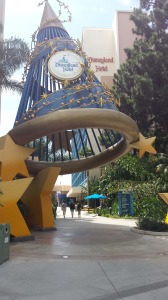 The “hat” is a well recognized part of the Disneyland Hotel and a popular place for guests to take photos.

The Grand Californian décor is considered, by many, to be a bit more “elegant” and “richer” than that at the Disneyland Hotel.  The rooms are a bit smaller and they do offer the bunk bed option at the Grand Californian – not available at The Disneyland Hotel. The bathroom has two sinks with granite counter tops and offers complimentary shampoo, hand lotion, etc. (as is the case at both Disneyland Hotel and Paradise Pier).  It doesn’t have the magical “mickey touches” that I found in the rooms at the recently renovated Disneyland Hotel. I did, however, see a hidden Mickey in the room carpet.  For some, this is attractive.  They enjoy escaping those touches and leaving them in the parks.  For others, not as much.  The grounds surrounding the Grand Californian hotel are very nice.  You really do get the feeling you are in the “woods” surrounded by lots of greenery.  The pool also offers an escape from the fantasy found in the parks.  The Grand Californian’s style/theme is similar to the Wilderness Lodge at Disney World.

The Paradise Pier, while very nice, does not offer as extensive of a theme and is a bit further away from the two parks at Disneyland®.  In my opinion, it also doesn’t offer quite the same experience as the other two Disney properties. It reminds me more of a “hotel” rather than a themed resort. The lobby is fun and the gift shop all Disney.  The rooms are fashioned more around what you would find at the Hilton. We have stayed at all  three and enjoyed each one.  Families may find that the Paradise Pier offers a less expensive option for staying at Disneyland than the Grand Californian or the Disneyland Hotel.

All three offer guests great options for staying on-site at Disneyland. If you are ready to book your own special magical trip to Disneyland, be sure to contact Castle Dreams Travel.