Posted on June 5, 2015 by DisneyDawnMarie

To be perfectly honest, I was really surprised how much I truly enjoyed Disneyland Resort. The theme parks, hotels, shopping… it was amazing. Yes, much smaller than Walt Disney World (I was looking at the entrance gates at California Adventure and asked Tracy how far Disneyland was, she told me to turn around- and there were their entrance gates!) but the best way I can describe it for Disney Cruise Line fans is the perpetual Classic Disney Cruise Line fleet (Magic and Wonder) vs the New fleet (Dream and Fantasy). Both are Disney, very much so- clean, reliable, safe, fun, etc- and have some of the same attractions and dining options, but there is SO MUCH MORE to do on the Dream and Fantasy, generally, than on the Magic and Wonder. Same can be said of Disneyland vs Walt Disney World.  I think it might be tough spending a week in Disneyland and only doing Disneyland parks without adding on costly specialty tours, etc. You can spend a week at Walt Disney World and not seen half of what they have to offer. But what Disneyland is truly magical… just as the Classic fleet is- and they are the original, just as Disneyland is.

Disneyland theme parks are completely immersive. You are truly transformed to another time and place as soon as you pass through the gates of both theme parks (same could be said in Walt Disney World) and it continues throughout the park. In Walt Disney World’s Magic Kingdom there is a flow to their “lands” heading to your left you enter Adventureland that flows into Frontierland into Liberty Square… Sometimes it is hard to tell when you have crossed lands, so to speak, for that half of the park. There is no question about where you are in either of Disneyland’s theme parks. For example, in California Adventure if you start up Buena Vista Street and start touring to your left you start in Hollywood Land that leads into A Bug’s Land that leads into Cars Land. Three totally different and immersive experiences.

In addition, I also felt far more immersed in the lands than I do in Walt Disney World’s lands. Everything was so over the top in Disneyland’s theme parks! They truly use each square inch to totally transform you and tell their story. I felt the same way when I visited both resort hotels I saw- The Disneyland Hotel and The Grand Californian. I also felt it was easier to make my way around the parks and hotels because things didn’t feel so spread out.

As far as Diamond celebration merchandise- they have some pretty amazing keepsakes & I felt the need to bring home a few. And these are just a few of the few I came home with! The large, red mickey balloon popcorn bucket (which is also available in blue and purple for $12.50 each), a magical light up paint brush (that will interact with select nighttime spectaculars at Disneyland Resort &  can also be used these at select Disney Destinations around the world), The Legacy Collection Disneyland 3 CD set (features classic music from Disneyland attractions and is now only available at Disneyland, but will be released world wide in August), Special Diamond Celebration pins ($9.95-$11.95 each), and Special Edition pens with crystals that also can be used as a stylus! 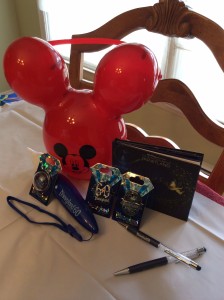 So, where is my family staying in November?  I got home I made a reservation at the Disneyland Hotel. Walt’s original, such a fun resort I felt my family would love it. I also felt comfortable there and thought we would spend less time getting to know the resort because I already did. But, there are some cons- the biggest for us? The bathroom set up. In Disneyland Hotel everything is behind a closed door. At home, this isn’t an issue. On vacation- to have the sinks outside so others can wash up while someone is showering- is a HUGE help, especially with a family of five. Another con- no balconies. Mike stays up late and I am an early riser. We have become used to seeking refuge on the balconies while others are sleeping.

So, we switched to The Grand Californian Resort and Spa. After some digging- we upgraded to their club level. Besides the room creature comforts we are looking forward to, we will have access to their lounge for more space beyond our room and their light food offerings will certainly help with snacks during the morning, lunch, tea time, early evening snack, milk and cookies, evening drinks. We are also looking forward to watching the fireworks one night from the Craftsman’s Club deck. My husband is a huge fan of Frank Lloyd Wright- of whose architecture style the hotel takes some of it’s theming from, so it really did become clear this was where we would stay.

I treasure those strolls up Main Street thinking of those days back in 1989, now with Mike and the kids no matter how old we are all getting. Here I was at Disneyland on business, for the first time without a family member in the same time zone. This park was a realization of Walt Disney’s dream to have a safe place for families to spend quality time together- and I didn’t do that on my first trip. It did feel weird… except on that last day…

Tracy and I were in and out of attractions and shops, and two Cast Members had assumed we were sisters when we were trying to decide which chocolate covered candied apples to buy. We both thought that was really odd-  neither of us feel we look remotely alike and with Tracy from Wisconsin and me from Lawn Guyland- we certainly sound different. But, I was quickly reminded that sometimes friends, especially good ones, can be like family- and maybe that was my lesson.

(These are the apples we bought, special for the Diamond Celebration) 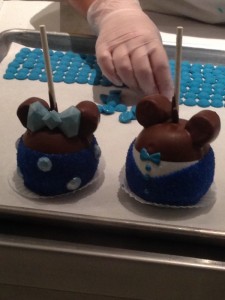 Once at LAX, I went to buy lunch for the plane ride home- I ordered a panini and Diet Coke and it was all handed to me in a brown, paper bag.. I didn’t really look at any of it until I was seated in my seat on board my flight home…

Dad’s name was John. Now, if you believe in signs as I do- I am hoping he was reminding me (and certainly not quietly) that he was there with me too in Disneyland as he was in Walt Disney World almost 26 years ago.

Disneyland is a magical place, where magical things can happen. I am so excited to be able to share all I have learned with my family and friends who visit Disneyland not only during their Diamond celebration, but for years to come.