Every Dream Is A Fantasy, Day 7

Posted on September 13, 2015 by DisneyDawnMarie

Ok, today we didn’t mind the Cabana chairs wake up call- today 4 of us were running the Castaway Cay 5K and needed to be up and in the D Lounge by 8am! If you are participating in the Castaway Cay 5K, you are one of the first people of the ship. All 5 of us disembarked and dropped Mikey off at Scuttles Cove while we were competing.

The girls were trash talking Mike & I all week about this- they were going to leave us in the dust, we were going to need wheel chairs to make it back on the ship- you name it. Now, it was a beautiful morning- mid-80s and the humidity level matched the temperature.  This wasn’t going to be easy. My oldest insisted, before we left NY, she didn’t want to participate- but at some point while we were gone- in true teenage form- she changed her mind. So, I gave her my sneakers and I wore my mother’s- which weigh an easy 10 pounds and closed with velcro. What every runner wants to run a 5K in. 😉

We lined up and the race starts and the girls, Mike, and I take off. Well, I jog- I just need to get out of this pack of people. Basically now, I am on my own, making friends along the way. Half way through we pass a water station where I see my girls- who aren’t looking too great. They hop back in with me, which is nice. But they stop at every chance to get water. I chose not to do that because it is really hard for me to start up again once I stop. We finally see Mike- who is running with the lead pack of runners- holy cow! The race finally begins to end and a group of women and I decide to sprint across the finish line to finish strong. Mike is no where to be found, but I assume he went to go get Mikey from Scuttle’s Cove- which was something we said the first one across should do. After 10 minutes or so I see the girls and encourage them to finish strong. Once they pass- we get our pictures taken and we are on our way to meet Mike and Mikey. So much for them leaving their parents in their dust!

Turns out- Mike and Mikey were busy taking character pictures … Once we are changed into our bathing suits we meet up with Tricia’s family and head to the family beach, and right in to the water. We were relaxing for maybe 20 minutes when we hear thunder and decide to head out to Cookies Too for lunch before they start telling everyone to get out of the water due to the thunder. We were the first ones to have lunch and were seated comfortably when it seemed like everyone from the beach was headed that way. A few of us ran to get some shopping in and the rains began to pour. We made our way back to our families and then tried to make it back to the ship- which wasn’t easy. A major storm was settling in over the island and it was just over the ship as we were making our way there. Cast Members even stopped us at Scuttles Cove for a bit until it was safe to continue.

Once on board we were soaked and exhausted, but Cast Members met us on the ship with dry, warmed towels! We headed back to our staterooms to shower and really just relax (aka nap) in our staterooms for the rest of the day. The rains did stop almost 3 hours after they begun, and we were able to enjoy our gorgeous view of Castaway Cay from our balconies. Pulling away from Castaway Cay only made us yearn to return again… 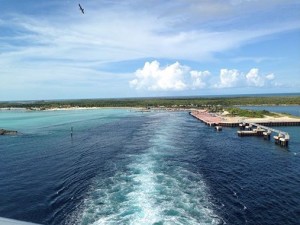 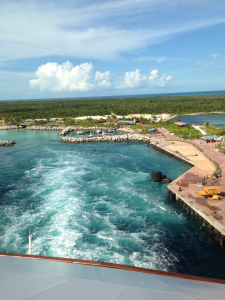 As hard as it was to leave Castaway Cay, It was nice to be well rested and showered before some more pixie dust! This was AMAZING. I am so happy the kid were older because f they were younger, I can imagine them being totally overwhelmed by this experience. It was a quick 10 minutes as they were needed in the Lobby Atrium for “See Ya Real Soon”. After a quick visit to Shutters it was time for our last dinner inside Royal Court. After dinner it was off to the shops for some last minute shopping before the night’s show, “An Unforgettable Journey”. Then the kids headed off to the pools and Aqua Duck and the adults went to Skyline for a drink and then the Tube to see Michael Holly’s adult comedy and juggling show before ending the night.