Posted on July 17, 2011 by DisneyDawnMarie
“To all who come to this happy place, Welcome. Disneyland is your land. Here age relives fond memories of the past…and here youth may savor the challenge and promise of the future. Disneyland is dedicated to the ideals, the dreams, and the hard facts that have created America…with the hope that it will be a source of joy and inspiration to all the world.” 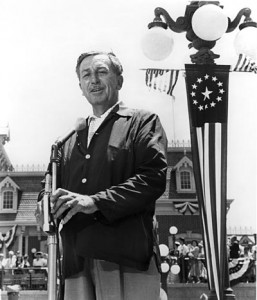 Art Linkletter, Ronald Reagan, Bob Cummings, the Mouseketeers, Thurl Ravenscroft, California Governor Goodwin J. Knight were all in attendance as ABC broadcast the event live. George Lucas (who was 11 years old at the time) was also in attendance with his family.

Temperatures reached over 100 degrees  that day, turning the asphalt  (which had just been laid the night before) wasn’t dry and ready for the crowds, and it is said that ladies’ high heel shoes sunk into the tar! OK… why wear high heals to an amusement park? 😉 Water fountains ran dry due to a plumbers’ strike and Walt Disney had a choice between running water fountains and working toilets he chose the latter. Though guests complained that because the event was also sponsored by Pepsi, it was a way to sell more soda. Then there was a gas leak in Fantasyland… not the vision Walt Disney had been dreaming of.

The park was overcrowded with twice as many guests as expected due to ticket counterfeiting. There was even a report of one person placing a ladder over the park’s backside fence and letting people in for $5. Official general admission cost $1! The park’s food and water ran out, and rides broke down. 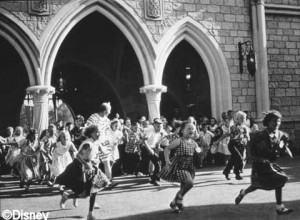 Disneyland opened with 5 themed lands (Main Street, Fantasyland, Adventureland, Frontierland, and Tomorrowland) and 18 attractions, including the Jungle Cruise (the only ride in Adventureland at the time), the Mad Tea Party, and Dumbo’s Flying Elephants. 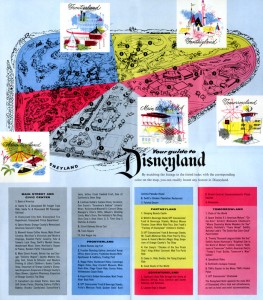 The original plans for the park were on 8 acres next to the Burbank studios where Walt Disney’s employees and families could go to relax on the time off. Walt felt there wasn’t a place where families cold go and enjoy themselves together. Over the course time, Walt’s vision grew to 160-acres and a park where everyone could enjoy themselves.

Today, cast members wear pin badges on July 17 in celebration of the park’s anniversary, indication the number of years the park has been open (today’s pins will read 56). The 56th anniversary pin was released June 30th of this year and retails for $10.95 . To order this pin contact Disneyland® DelivEARS Merchandise Guest Services at 1-800-362-4533. 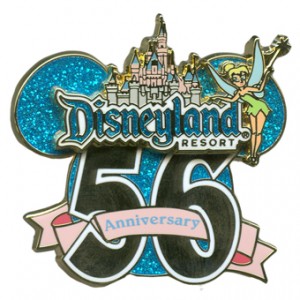 This entry was posted in Disneyland, Mouse Merchandise. Bookmark the permalink.