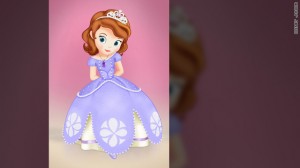 Disney introduced their newest Princess today aimed aimed at children ages 2 to 7.  Princess Sofia will have a new television movie and  television series called “Sofia the First” on the Disney Channel and Disney Junior.  Modern Family (Alex) star Ariel Winter has been chosen as her voice.

Disney’s Princesses bring the company $4 billion a year in sales, and Sofia will be their youngest ever Princess.