Today we’re sharing with you a trip report from Andrea Sabin, a travel agent from our sponsor, Castle Dreams Travel. 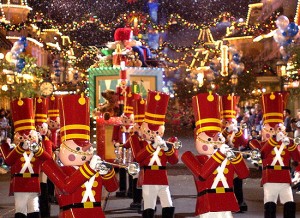 After years of seeing Walt Disney World’s back lots and being escorted through the parks and many wonderful venues as a meeting and event planner, my family and I finally experienced the magic as guests in mid-November, 2011.

My job required (gave me the pleasure) of traveling to Orlando, FL to stay at Disney hotels and hold events inside the parks but as many times as I’d been there for work, I had never been for pleasure.  I thought I knew it all about the parks and going with my family somehow wouldn’t be as magical but I couldn’t have been more wrong!  Walt Disney World is magical for guests of any age, time after time.

My husband, our 3 ½ year-old son and I made our plans to stay at the Grand Floridian after weighing the options between that hotel and Animal Kingdom Lodge.  We decided on the Grand Floridian due to its proximity to the Magic Kingdom (which I had NOT been to as they don’t allow private events/corporate functions) and riding the famous monorail.  We marked the calendar with Mickey Mouse stickers and numbered the days.  We all counted down the days to our vacation as our excitement grew.

Since it was our first visit to the parks and with a 3 ½ year-old, we only planned to stay at the hotel for three nights, spending two days at the parks.  Luckily our son was exactly 40 inches, the minimum height for many rides to ride alone, so he didn’t have any trouble getting onto the rides he (eventually) wanted to ride.

We didn’t bring a stroller, and for us, it worked in our favor.  Though mid-November (just before Thanksgiving) wasn’t as busy and the weather was comfortable, in the 70s, we were able to avoid crowds and trying to maneuver a stroller because our son would walk or ride on his Daddy’s shoulders.

It was mid-November and our vacation was upon us.  We booked the complimentary Disney’s Magical Express bus from the airport to the hotel and were greeted by Victorian staff at the beautiful and grand, Grand Floridian.  The lobby was decorated for Christmas with boughs, a massive Christmas tree and a hand-made gingerbread house that was large enough to fit a small cashier station inside for purchasing yummy treats. The lobby’s scent of gingerbread was heavenly.

We had a garden-view room that overlooked a pool and we had a beautiful view of the famous red rooftops that give the Grand Floridian its Victorian-era look.  Service was wonderful, as you would expect from Disney.  There was always a friendly greeting wherever we went.

Our first day was spent at the resort, relaxing after an early morning flight.  The pool was quiet as you may expect; many of the hotel guests spent their day at the park(s).  The hotel offers a few different options for restaurants and a quick service venue, Gasparilla Grill & Games, where we had our meals when not in the parks.  You can also utilize your meal plans at Gasparilla’s.

Our first park adventure was at Magic Kingdom.  Just one stops down from the Grand Floridian, the Magic Kingdom had me in awe of Cinderella Castle.  By the end of the day I couldn’t take enough photos of the Castle and I felt the wonder of it all, like a little girl.  We stopped for character photos at the start of Main Street USA and made our way to Fantasyland to ride Dumbo the Flying Elephant.  Our boy wasn’t so keen on it, but we managed to get the three of us in one of the Dumbo cars and enjoyed the ride.  Our son preferred the photo-op Dumbo car behind the ride.

In our time at Magic Kingdom we crisscrossed Lands, rode the Magic Kingdom Railroad, had photos with our Disney character friends, watched the Main Street Electrical parade (a treat for most, but for those of us from the Twin Cities, we can see this type of parade in the cold and snow from Thanksgiving weekend up to the weekend before Christmas; on second thought, I much preferred the warm Florida weather) and watched our son’s excitement (and ours) grow throughout the day.  The boy who started the day afraid of the rides soon became a pilot of the Astro Orbiter, road the “rollercoaster” of Splash Mountain and became a driver at Tommorrowland Indy Speedway.  He gave us specific instructions that he was to drive and our only job as a parent escort was to push the pedal.  He drove so many times that he was given his own driver’s license.  We also got over our son’s fear of the boat-ride It’s a Small World in Fantasyland.  This soon became known as the “song-ride” where my son would sing his ABC’s to the tune of “It’s a Small World” for the entire ride.  We rode again and again and when we stopped with the “song ride” it was back to the race cars.

Although we didn’t see the entire park during our day there, we were tired enough to go back to the hotel.  The day was truly magical.

Our second day at the parks was spent at Animal Kingdom Park.  We rode the Monorail to the Transportation Station and then a bus to the park (not knowing there was a bus from the Grand Floridian to Animal Kingdom Park).  We spent a fair amount of time in DinoLand U.S.A digging for bones in the Boneyard.  Camp Minnie-Mickey was by far our favorite spot for character photos and interactions.  We got Mickey, Minnie, Donald, Goofy and Chip & Dale all within 100 yards of each other.

We were treated to front row seats at the Festival of the Lion King show which was a spectacle for the eyes and the ears, but the larger than life characters, fire dancing and loud music was a bit much for our son.  He prefers a quieter adventure, like the Kilimanjaro Safari, Wildlife Express Train (which gives you a behind the scenes look at some of the animal buildings) and Mickey’s Jammin’ Jungle Safari parade.

Later that same night we had tickets to Mickey’s Very Merry Christmas Party, a separate ticket event, at Magic Kingdom so we headed back to the hotel for a much-needed rest.

We headed to the Magic Kingdom once again, but this time in the evening.  We were coming in as the daytime park goers were leaving.  We were given a wrist band and allowed inside the park.  All of the attractions were open, to my son’s delight – though trying to wade through parade traffic to get from Tomorrowland over to Fantasyland wasn’t so delightful.  The Christmas Party provided free hot cocoa and cookies and a fantastic nighttime parade, Mickey’s Once Upon a Christmastime Parade, with the floats beautifully lit, but much different from the Main Street Electrical Parade.  The Christmastime Parade’s grand finale included Santa himself, along with elves and of course our Disney character friends.  They even made it “snow” on Main Street U.S.A.

The most goose bump inducing moment for us, as adults, was watching the enchanted Magic, Memories & You show on Cinderella Castle.  The castle was used as a backdrop, or screen if you will, to show a variety of photos of park goers, video of Walt Disney, characters and at one point, showing a rocket lifting off from one of the turrets on the castle, all choreographed to beautiful, engaging music.  The show was capped off by the Holiday Wishes fireworks show.

This vacation was truly magical for all of us; for our family, 3 ½ was a great age to bring our son, but I know the next time we go, he will be able to do more things and have even greater adventures.  We were definitely in the Christmas spirit after our evening at Mickey’s Very Merry Christmas Party.   Our son was also feeling the Christmas spirit, having decided that a wooden train car at our local train store looked like a monorail, so he had to have one at Christmas. As I type this, it’s in his stocking waiting for a Christmas morning reveal.

As a new park guest, with lots of park experience, it would be my pleasure to help answer any questions you may have about Walt Disney World Parks, or other Disney parks and hotel destinations, and help you plan your next magical vacation.