Taking the Time to Smell the Flowers AGAIN, A Trip Report- Pre Planning

Posted on March 2, 2020 by DisneyDawnMarie

So, surprise, surprise- we are headed back to Walt Disney World this Spring after absolutely LOVING our trip last year. But what can we do to tweak it to be even better?

We decided from the beginning to add a night. Three nights over a holiday weekend, just wasn’t enough. Our first day, in particular, in hindsight felt rushed. We were landing around 2pm and had plans to in the Magic Kingdom by 5pm. We made it, just too much unneeded stress at the beginning of the trip.

Next we needed to choose a resort. We stayed at the Yacht Club last year and wanted to be near Epcot and Hollywood Studios this trip again. We chose The Boardwalk Inn as we have never stayed there and it was someplace everyone we were traveling with wanted to stay. So, that was easy- but which room or rooms to choose? We are a family of 5 with our 3 kids all adult sized. After much debate, we chose a Deluxe Room, Club Level. Why? Plenty of room for us and this gives us to the Innkeeper’s Club for breakfast and light snacks throughout our stay. 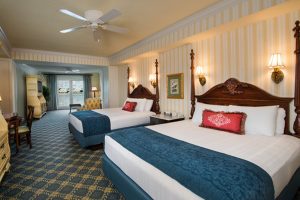 OK, so we have our dates and room booked.

During our stay not only will there obviously be the Epcot International Flower & Garden Festival, but there will also be a Villians After Hours Party in Magic Kingdom AND Mickey and Minnie’s Runaway Railway will be open then as well.

So, we have a lot of planning to try to fit everything in.

Roughly, once our family arrived, we will head to  Trattoria al Forno for brunch with Ariel, Prince Eric, Rapunzel, and Flynn Rider. Later, we have planned to all meet (remember, we are a group of 11) for dinner just before 5pm on our arrival day at Le Cellier (no worries, we have a much earlier flight this trip).

The next day we will likely head back to Epcot in the later morning hours to enjoy some of the outdoor kitchens and topiaries. We then have an early dinner reservation at Whispering Canyon Café ahead of that evening’s Villians After Hours Party.

The following day- GASP- we have no plans.  Roughly, I am sure we will spend time enjoying the pool, maybe even play some mini golf at the nearby Fantasia Gardens, before heading back into Epcot to snack around the world for dinner in the Festival’s outdoor kitchens.

The next day we are hoping to secure a VIP guide (well two, as we are a group of 11), to help us navigate Disney’s Hollywood Studios. Hopefully the VIP can help us ride Rise of the Resistance, Smugglers Run, Star Tours, Slinky Dog Dash, Aliens Swirling Saucers, Toy Story Mania, Mickey and Minnie’s Runaway Railway, Tower of Terror, and Rock n Roller Coaster. We want to end at Oga’s Cantina as we were able to secure a reservation there for all 11 of us. After that, we are considering adding the Star Wars: A Galactic Spectacular Dessert Party once reservations open for that. We do have a late reservation inside the newly renovated Beaches and Cream for our, now traditional, farewell ice cream indulgences.

When we wake up on our 4th morning- we will enjoy a light breakfast inside the Innkeeper’s Club before catching early flights home.

Yes, we are skipping Disney’s Animal Kingdom again. Why? It’s the hottest park on property and also the largest. With all that is new inside Hollywood Studios, After Hours in Magic Kingdom, and the Festival in Epcot- there just isn’t enough time. Maybe next year? An After Hours Party would be an awesome use of time for a short trip like this one and conquering the park at night is ideal to combat the expected heat. We can hope- but we still have some planning to get through this year first!

2 Responses to Taking the Time to Smell the Flowers AGAIN, A Trip Report- Pre Planning