The Best Christmas Gift Yet, A Trip Report

Posted on January 6, 2019 by DisneyDawnMarie

So, we did it. We gave our kids a Walt Disney World Getaway (and I say getaway because it was a very quick and very busy 4 days) just this past Christmas. Yes, we have surprised them before with a trip- once a few years back and it didn’t go well. Our youngest son was thrilled but our oldest daughter was horrified because she didn’t know and really loves to help in the entire planning process, etc. Our middle daughter didn’t know what to think, but she was happy. This time, we let our oldest daughter in on the surprise early on. Our middle daughter found out once most of the plans were made as she was “just checking” our My Disney Experience account. Our youngest was surprised Christmas morning, well sort of. I will explain later.

When Mike and I decided we might want to give our kids the gift of travel this past holiday- we wanted to “feel” our kids out first. A few years ago, we just sprung it on them the night before. This time we would be giving it on December 25th, but we didn’t plan on leaving until January 2nd- with our holiday traditions it is hard to be away before that. We started with separately asking each of our three kids if they could remember what we gave them the year prior. None of them could remember everything- and they didn’t always remember the big item we gave. They can, however, tell you all about the vacations we took within the past 5 years or even longer. So, this absolutely helped motivate this gift.

We decided a quick 3 night trip because, time wise, it made the most sense. We couldn’t leave before January 2nd and we wanted to be home on or by the 5th as everyone was needed to go back to work and school by the 7th. Our two younger children would be extending their holiday break by 3 days- which is fine as they are both honor students who can and will catch up.

Where to stay was the next hurdle. Mike and I had decided Disney’s Yacht Club Resort – great location and updated guests rooms located nearby Disney’s Hollywood Studios- where we knew we would be spending at least 1 full day visiting Toy Story Land. Once we let Jacqueline in on the surprise, she suggested a return back to The Grand Floridian Resort and Spa as it is our family favorite and with a quick trip we are familiar with everything and won’t waste time getting to know “the lay of the land” so to speak. We then decided to upgrade to their Sugar Loaf Concierge as to take advantage of now being able to pre-purchase 3 additional Fast Passes during our stay. This new option requires a three-day minimum ($150 + tax per person for 3 days) and you can only purchase one Fastpass+ per ride (without tier restrictions), but will be able to use FastPasses in more than one park per day, as well as book FastPasses 90 days in advance of your check out date, as opposed to the traditional 60 days in advance of your check in date for resort guests (30 days for offsite guests). This option was incredibly attractive as we would be traveling during one of the most busiest weeks, as far as Walt Disney World attendance, and I am all about maximizing our time wisely as much as possible when we travel. We also added the Disney Dining Plan as we were able to secure dining reservations that we knew would maximize our vacation dollar as well by using the plan. Memory Maker is also a no-brainer for us to add as we take so many pictures during our vacations and the PhotoPass photographers are always positioned in the best locations.

Before we knew it, our gift was set and all paid for. We land at 10am in Orlando and plan to grab a quick lunch ASAP, assuming the lounge offerings won’t be enough. Then we head to Animal Kingdom for Dinosaur, Everest, and Flight Of Passage all scheduled 1:35-4:35. Then we hop over to Epcot, we plan to mobile order dinner, and then head to Soarin at 6, Test Track and then Ending at Illuminations (all Fast Passes). Next day we are in Toy Story Land experiencing all 3 attractions starting at noon before a very late lunch at 2:40 at Sci Fi. Then on to Star Tours, Rock N Rollercoaster, ending with Fantasmic. On Friday we have Be Our Guest breakfast at 10 then Winnie the Pooh, 7 Dwarfs Mine Train, Haunted Manson, Splash Mountain, Big Thunder Mountain, & Pirates of the Caribbean. The girls and I have blow out appointments inside Ivy Trellis at 5pm before our 6pm Narcoossees reservation. On Saturday, we have only 3 Fast Passes starting at 11 for Buzz, Space Mountain, ending with Meeting with Mickey Mouse on Main Street. We expect to be picked up around 2 by Disney’s Magical Express for our 5pm flight.

Two days before Christmas our middle daughter slips up in front of our son about missing three days of school after the break. He was confused and we quickly changed the subject and hoped he would mildly forget. It’s never dull, right?

Christmas morning came and the kids received a few things under the tree- mostly needs vs wants, quite frankly. Since the girls were in on the surprise- it made it a tad easier. Then Mike and I announced there was one more gift and we handed each child something…. 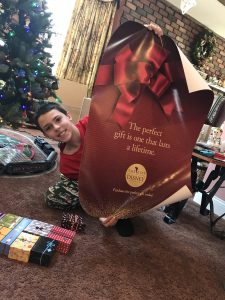 Mikey unrolled his poster and screamed, “I KNEW it”! when he read about the best gift was the gift of a Disney vacation. Katie, our middle daughter, unwrapped our Magic Bands- so he knew where we were going now. Jacqueline, our oldest daughter, opened the binder which announced the when- which is when Mikey did a double take and was SHOCKED we were leaving the following week. We spent the next few days talking about the trip- making sure we had absolutely everything everyone wanted to do planned and taken care of. Now all we needed to do was get there! 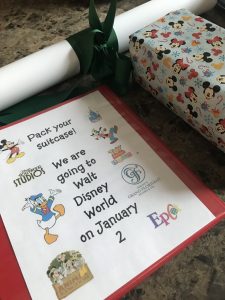