Posted on October 27, 2014 by DisneyDawnMarie

Walt Disney World Resort Refurbishments are an expected part of everyday life at the resort. However, if you have been planning a magical trip for you and your family- it can be rough to find out your ideal location(s) can or will be closed during your stay. To avoid disappointment for those traveling soon, here is a list of announced upcoming rehabs…Disney’s All-Star Music Resort
• Intermission Food Court August 4, 2014 to December 19, 2014
Note’able Games Arcade will serve as a temporary location for grab-and-go meals such as sandwiches, salads, and bakery items. Transportation will be provided for Guests who wish to dine at Disney’s All-Star Sports Resort or Disney’s All-Star Movies Resort. Pizza and other items available for in-room delivery daily from 3 pm to 1 am.
• Note’able Games Arcade July 26, 2014 to December 19, 2014
Guests may visit the arcades available at Disney’s All-Star Sports Resort and Disney’s All-Star Movies Resort.

Disney’s Beach Club Resort
• Guest Room Renovations October 13, 2014 to August 22, 2015
Guest rooms will be refurbished with new hard and soft goods. Guests will not be accommodated in the affected areas, but it is possible that some noise could travel while work is in progress (between 10 a.m. to 4 p.m. daily).

Disney’s Polynesian Village Resort
• General Construction December 2013 to March 2015
The east portion of the beach (near the Transportation and Ticket Center) and Sunset Point are being refurbished and are unavailable. Guests may see or hear work in progress.
• Great Ceremonial House – Lobby March 2014 to December 2014
The atrium is being reimagined to highlight the cultural elements of Polynesia and provide more expansive views. At certain times of day, there may be some noise and alternative paths of travel may be needed throughout the Great Ceremonial House. To enhance the check-in experience, Guests are encouraged to participate in Online Check-In.
• Nanea Volcano Pool and Slide July 28, 2014 to early 2015
The main pool and slide will be closed for enhancements. Guests who stay at Disney’s Polynesian Village Resort while the main pool is closed will receive one complimentary ticket for each member of their party to visit Disney’s Blizzard Beach Water Park during their stay.

Disney’s Wilderness Lodge
• Silver Creek Springs Pool September 3, 2014 to November 27, 2014
The main pool and slide will be closed for enhancements. During this time, the leisure pool at The Villas at Disney’s Wilderness Lodge will remain open. Guests will also have the opportunity to visit either the Main Pool at Disney’s Contemporary Resort or the Meadow Swimmin’ Pool at Disney’s Fort Wilderness Resort & Campground. Complimentary transportation will be provided to both of these neighboring resorts.
• Trout Pass Pool Bar September 3, 2014 to November 27, 2014

Walt Disney World Swan Hotel
• Guest Room Renovations August 20, 2014 – TBD
Renovation work is scheduled to take place between 9 a.m. – 7 p.m. daily. No guests will be accommodated in the renovation area as to minimize impact on the guest experience. 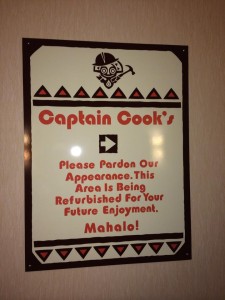