Posted on October 19, 2018 by DisneyDawnMarie

Everyone was excited to try Rapunzel’s Royal Table for dinner. We had tried it over the summer, actually eating there for dinner 3 times during our previous week-long sailing. We knew what to expect food wise, and we knew the menu isn’t for everyone but cruises are the perfect place to try something new…

Now, we were a big group- traveling with 4 travel agents and their families our group grew pretty large for dinner, 27 people to be exact! So, the usual first night table juggling had to be worked through and set for the next 4 dinners.

Food wise, to start I ordered the Ravioli “Tiroler” that was filled with Puffed Beef and Portobello Mushrooms tossed in a Red Wine-Thyme Reduction served with Roasted Carrots and Pearl Onions. 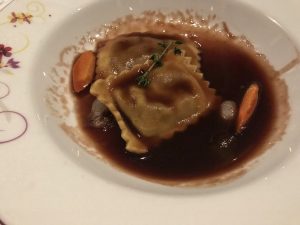 For my entree, I ordered the Captain of the Guards Roasted Prime Rib of Beef with a Double Baked Potato, Broccoli, Sweet Roasted Carrots, and a Red Wine-Veal Sauce. 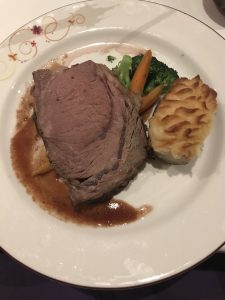 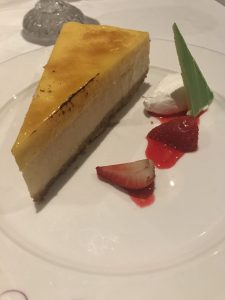 Rapunzel’s is a lot- loud with minstrels and thugs roaming around. We were even visited by Flynn Rider and Rapunzel. One thug Vladamir, took a liking to our son and renamed him “Rebecca” (a more thug-like name we were told) – which then became Mike’s long running joke throughout the cruise. 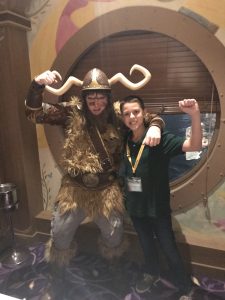 Just after dessert we were able to run upstairs to deck 4 to see the Statue of Liberty as we passed by…. priceless! 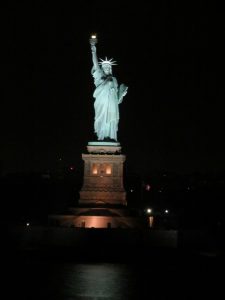 After dinner- Mikey wanted to meet up with Pluto and we needed to do some shopping all before our 8:30pm showtime for Disney’s Tangled in the Walt Disney Theater. Then there was the rest of the night ahead of us too!