Adventuring to Disneyland in 2016

Posted on January 7, 2016 by DisneyDawnMarie

It really is no secret I had fallen in love with Disneyland in 2015. I found it very user friendly, quaint and charming, full of Disney history, well thought out areas and attractions- the list goes on. I wanted to take my family with me when I went in November 2015, but we just couldn’t make it work schedule wise. Well, we found a way to make it work- in a big way- in 2016!

2016 is the year my oldest daughter turns 16. Her sweet 16. This is HUGE in New York- but I have found in other areas of the country it isn’t as big a deal. Good news is, Jacqueline has always wanted a trip. She isn’t a fan of being the center of attention- she is a fabulous dancer and on stage you really would have no idea watching her- but an all eyes on her party just is not her thing.

She had decided that she wanted us all to return to Aulani. Her best friend (who is also the daughter of my Castle Dreams Travel co-owner, Tricia) also wanted to go with her family as her 16th birthday is about 6 weeks after Jacqueline’s. We absolutely LOVED it there- super relaxing and it far surpassed all of our expectations.

But, there was a been there, done that feeling to making that trip again. It also stressed me out because what could we do to top that first trip on such a special birthday? The answer was to add on a Disneyland trip to the Aulani trip- which isn’t too unheard of coming from the east coast. But now we were talking about a longer trip, with a bigger price tag. Plus lots more planning now.

Yes, we took Aulani off the table because this trip would be about the same price as an Aulani trip but took the planning and scheduling out of our hands and inserted places and experiences we couldn’t even try to plan to do. Add in neither of our families had been to Disneyland before and now they would be doing it as a VIP? It really wasn’t as hard as a sell as we thought it would be. Thankfully, both of our daughters love Disney almost as much as their mothers do.

So, both families deposited for August 2016!

So, what does this trip include? Upon your arrival at LAX, you are greeted and escorted to your Loews Hollywood Hotel by a private car.  The only item on the schedule today is a welcome dinner, which I am sure is amazing as they don’t give you many details other than it is in our hotel.

The next day we take a walking tour of Hollywood including the Chinese Theater with their hand prints in the side walk and the Hollywood Walk of Fame. From there we head to Jim Henson Studios- our family is super excited by this as we are HUGE Muppets fans! Next, we have lunch in Tam O’Shanter – Walt Disney’s favorite Hollywood lunch spot. We have the rest of the day to ourselves. I would imagine we will head to the pool as there is quite a bit of activity before lunch today.

Day 3 we head to the Walt Disney Studios for a private tour and lunch in their commissary on the lot. We are also given some time for shopping at The Walt Disney Studio Store that is not open to the general public. After lunch we head to Walt Disney Imagineering for a tour before heading to Disneyland and the Grand Californian Resort and Spa. After our welcome dinner we have free time to explore the park through a priority entrance and VIP experience to boot. Did I mention they will still be celebrating Disneyland’s Diamond Anniversary? 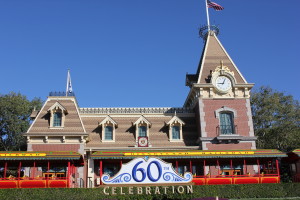 Day 4 we start the day with breakfast inside Disneyland park. After a private breakfast buffet we head on a VIP and backstage tour of the park before lunch (we are given a voucher to use at a quick service restaurant). We have the rest of the day to ourselves to enjoy both Disneyland and California Adventure Theme parks with Fast passes and priority seating for the afternoon parade and evening fireworks.

Day 5 we head into California Adventure theme park after a character breakfast inside Storyteller’s Cafe  for a VIP and backstage tour of the park. We also get a special behind the scenes look at Carsland and a Fast Pass to Radiator Springs.  The rest of the day and evening is on our own before our special farewell dinner at Carthay Circle and VIP viewing of World of Color.

Day 6 a character breakfast is included at Storytellers Cafe in our hotel as are our transfers back to the airport to head home.

We are fairly certain we will at least add a day on at the end of he trip. After taking two Adventures by Disney vacations- they are EXHAUSTING. It might be nice to designate an entire day to veg by a pool and do nothing after a jam packed week. The debate is do we stay at the Grand Californian or do we resort hop over to the Disneyland Hotel- which I loved my prior 2 Disneyland visits? We have time to decide, but right now we are dreaming of visiting a certain Castle in California…

2 Responses to Adventuring to Disneyland in 2016