This past week, my family and I were lucky enough to take advantage of an amazing Broadway ticket package offered by Disney Visa. Cardmembers are able to purchase VIP tickets to see ALADDIN on Broadway and receive exclusive benefits! This package is available for all performances through July 5, 2015.

Living in New York, we go in to Manhattan a few times a year to see a Broadway musical and try some place new to eat. Today we chose the legendary Sardis for an early dinner before our show.

Sardis has been a staple in the NYC Theater district for almost 100 years. Inside you will find caricatures of a number of Broadway stars decorating their walls. The food is simple but delicious. Mike and the girls all ordered angus beef burgers, Mikey had chicken fingers and fries and I had a chicken caesar salad. Each of us finished all of what we were served it was so good! For dessert we ordered a slice of cheesecake and their famous Boccone Dolce-  it is made with Meringue, Fresh Strawberries, Whipped Cream and a Touch of Chocolate. It is something I would even recommend just going in and ordering alone! 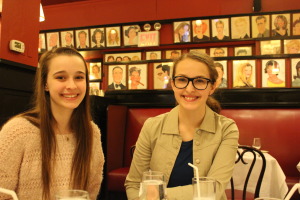 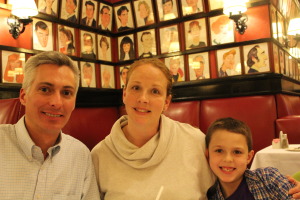 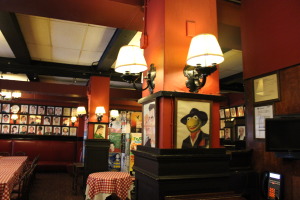 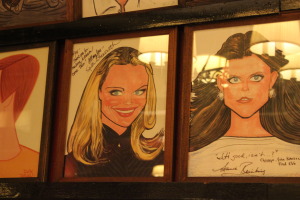 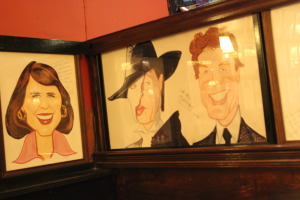 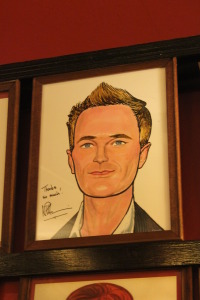 After Sardis, we strolled around the streets a bit before making it over to the New Amsterdam Theater. This is an absolutely gorgeous theater that is an attraction in itself. I have been fortunate to have been able to tour it twice last year:

The New Amsterdam was built in 1903 and Disney Theatrical Productions signed a 99 year lease for the property in 1993. They upgraded and renovated the property so extensively, there are few theaters left in the world that can compare in beauty and history.

We all have been looking forward to seeing this show since the commercials started in our area well over a year ago… We entered the box office and asked for our VIP gifts and we were handed our 5 packets containing our lanyard, pin, and vouchers for our free drink and picture. We ventured inside this magical theater and said hello to the picture of the theater’s resident ghost, Olive Thomas. Next we redeemed our vouchers for the glossy picture of one of the show’s stars and Tony award winner, James Monroe Iglehart and off to the bar for our free sodas in an Aladdin souvenir cup. Then we headed down to our orchestra seats in rows  C (3) and D (4). Do you have no sit this close? No- in fact, this is such a spectacular stage production- there are many benefits to sitting further back. However, there is something quite magical, especially for a child, to have the Genie wink at him during the show…. 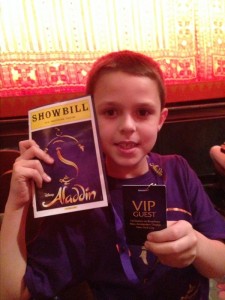 After examining our Showbills, we noticed we would be seeing Joshua Dela Cruz as Aladdin (in place of Adam Jacobs) and Merwin Foard as Jafar (in place of Jonathan Freeman). The girls were particularly excited to see Courtney Reed as Jasmine, as she originated the role in this Broadway production as did James Monroe Iglehart as Genie.

I cannot exclaim louder how amazing this production is! The music, storyline that isn’t quite like the Disney motion picture, costumes, dancing, special effects… it all adds up to magical theater moments our family will never forget. Don Darryl Rivera is HYSTERICAL as Iago. Courtney Reed’s voice is even more beautiful than she is. Steel Burkhardt, Brian Gonzales, and Jonathan had our kids giggling throughout the show- especially during “High Adventure”. Clifton Davis plays a loving father to his daughter,  Jasmine, in the role of Sultan he originated.  Joshua Dela Cruz as Aladdin and Merwin Foard as Jafar were fantastic. As soon as James Monroe Iglehart stepped on stage he was greeted with applause and he absolutely knocked the audience out by his amazing performance that is all his own.

This was a Broadway Cares week, where all participating shows offer special souvenirs to purchase with the proceeds going to https://www.broadwaycares.org/ .  We came home with a poster signed by the entire cast! 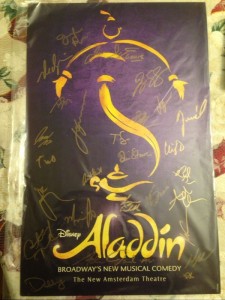 After the show, we headed out to the stage door and were able to meet, takes pictures with, and get autographs from Joshua Dela Cruz, Don Darryl Rivera, Cortney Reed, and James Monroe Iglehart. All answered questions and were very sweet and gracious to everyone who waited outside, in the rain, to meet them. They all signed showbills, programs, posters, pictures, cds and took as many pictures as this crazy mom was asking with her kids. 😉 Here are just a few… 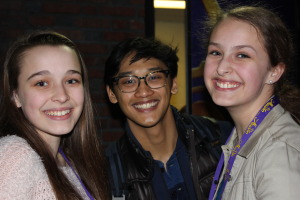 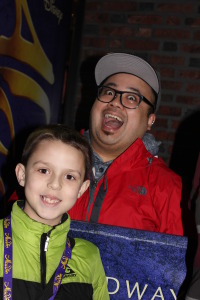 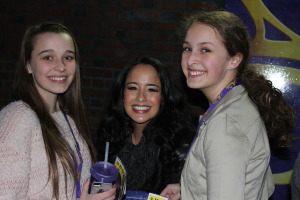 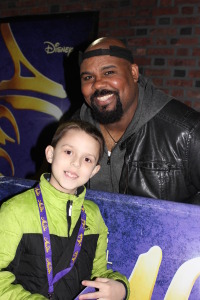 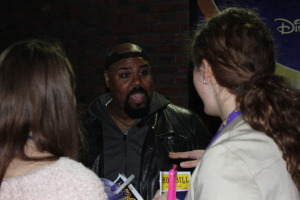 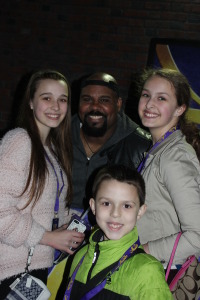 I cannot recommend higher for everyone with a Disney Visa to try and take advantage of this amazing deal. Like I said earlier, we see a few musicals each year being fortunate enough to live close by. That said, the kids are already asking when can we go back and see this truly magical show. They all have not said that before for any of the musicals we have seen and Mike and I couldn’t agree with them more. This show is certainly worth the hype and hefty Broadway price tag- it is a night we are likely to never forget. Another blaring example of the Disney Difference– you just cannot beat it!

This entry was posted in Disney on Broadway, Mouse Merchandise. Bookmark the permalink.