Are you surprising your kids with a Disney vacation this holiday season?

Posted on October 29, 2015 by DisneyDawnMarie

Are you surprising your kids with a Disney Destination vacation this holiday season? We all have seen the videos and heard the stories of how parents and grandparents have surprised children with a magical trip. Now, with the holidays around the coming up- expect to see a few more hit the internet!

My husband and I surprised our 3 kids (who were 14, 12, and 8 years old) last November with a 5 night trip to Walt Disney World. We gathered the family together the night before we were to leave, and gave them the box of Magic Bands and little decorations for them to decorate their bands with. Right away all 3 knew we were going- but the surprise was we were leaving when they woke up the next morning! I can tell you my 8 year old started celebrating immediately, my 12 year old started crying and celebrated right along side her brother. My 14 year old was so overwhelmed, she cried too- but she was nervous to leave without preparing- how would she make up her school work (we were pulling them from school for a few days), she was going to miss plans she had made with friends, etc. She felt totally unprepared because we are such a planning family and she needed the prep of planning because it is part of the experience for her. That said, she had an amazing time and didn’t have a problem bouncing back after missing some school. Her teachers were great about giving her the work she missed and she was able to make it up fairly quickly. The memories we made attending Mickey’s Very Merry Christmas Party, my son finally going on some “big” roller coasters, walking through the Osborne Family Spectacle of Dancing Lights one last time, and family pictures with Santa are priceless.

Mikey (who was 8 when we surprised him) was so excited he slept with his Magic Band on! 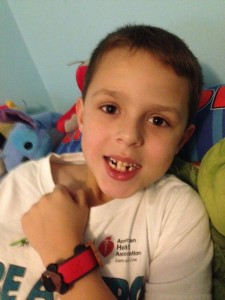 I spoke to a few others who surprised their kids and my only suggestion not to get your hopes up for the initial reaction of your kids to be overly excited – but that the excitement builds once they arrive – especially when they are young (or very type A teenagers).

Another Mom told me that her Castle Dreams Travel agent sent Mickey ears for her 4 year old twins in advance of their trip, had them close their eyes that morning and put the ears on their heads and told them to open their eyes. She got a very chill – oh so you got us Mickey ears? And she had to press them with -“And where do you think you might wear Mickey Ears?” Got a humdrum at Disney World? Even when she said – yes – we’re going to Disney World and leaving in just a little while, they didn’t seem all that excited even when I told them we were going on a plane (their first time) and everything – it wasn’t until we were there that they were excited.

To do it again, we would have told our kids maybe a week before. 2 of my 3 reactions were magically fabulous, but my heart did break for my daughter who was totally stressed out. Disney is such a magical place, involving everyone in the process is certainly not a bad thing. Everyone (including kids) has very high expectations on what they want the magical trip to Disney (be it Disneyland, Disney World, a trip to Aulani, a Disney Cruise Line vacation, or an Adventures by Disney vacation) trip to entail and include- and I now realize giving them 12 hours to digest that might not be the best idea, at keast it wasn’t for one of our children. That way you can scour over the plans you have already made (hotel and dining reservations, Fast Passes, etc), watch some vacation planning DVDs and videos on You Tube, etc. Let the excitement build…

Now- this has not turned my husband and I off to trying to surprise them again. Like I said, I would give them more time to digest it- and I love the idea of giving the gift of travel. We have no plans just yet to do it again, but I am helping other parents plan surprises, contact Castle Dreams Travel and their planners can help you surprise your family this holiday.