Posted on March 3, 2016 by DisneyDawnMarie

Today at the annual Disney shareholders meeting, Disney Cruise Line announced they are in the planning stages of 2 new ships. These new ships won’t be launched until 2021, but it’s a confirmation of what we were told of long ago.

Each new ship will be approximately 135,000 gross tons – slightly larger than the Disney Dream and Disney Fantasy (the youngest of the 4 current DCL ships)- and each is currently planned to include about 1,250 guest staterooms. 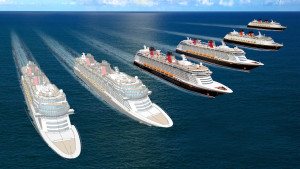 “The expansion of Disney Cruise Line only adds to our excitement for the unprecedented growth taking place across our vacation destinations, from new Star Wars experiences coming to the Walt Disney World and Disneyland resorts to the 25th anniversary of Disneyland Paris and the grand opening of our newest park, Shanghai Disney Resort,” said Bob Chapek, Chairman, Walt Disney Parks and Resorts.”

What do you hope to see on the new ships?

This entry was posted in Disney Cruise Line, What We're EARING. Bookmark the permalink.