This post was written by our dear friend, Sabrina C.  Sabrina had the opportunity to visit Disneyland Paris last month and took the time to write up this: 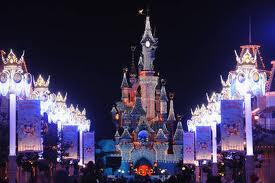 We zipped to Euro Disney on Paris’ RER, a speedy version of the US’s commuter rails, and landed literally on the Mouse’s doorstep.  Once there, we took advantage of the train station’s stores which sold every necessity we would need….food, drink, diapers, wipes, Advil.  We ignored the three military policemen with machine guns standing outside Disney Village (their Downtown Disney), headed into Disneyland Park (their version of the Magic Kingdom), and glanced longingly at Walt Disney Studio Park (their version of Hollywood Studios) which were only steps away.  We knew our time was short and heard correctly that lines were long, so we focused on Disneyland Park.


I practically ran the short distance to the gates, ignoring my husband’s question about why I was more excited about Disney than Paris.  Glancing above my head as we entered, I saw a woman sipping coffee on a balcony.  In her PJs.  And then I noticed several balcony doors open and jealously realized it was a Disney hotel!  Once seriously could not be closer to the park entrance.  It WAS the park entrance!  The same structure, when leaving the park, looked just like the Paris skyline (Disney-fied, of course).

Main Street is very, very similar to Disney World.  Jim even noticed the American flags waiving everywhere.  The biggest notable difference was the scale.  The buildings were not quite as high, the streets not as wide, and the Castle not as jaw-dropping.  In fact, the entire park was quite close to the ground.  It was amazing all the same.  Notably missing were the photographers eagerly waiting to scan your photo card and snap away.  I missed this, as this was a great way to get some wonderful family photos, one of which ended up being our Christmas card last year.

As we approached the Castle, I saw the better placement of several small stages all around it.  I thought this was a smart improvement, allowing more people to participate in the fun shows around the magic of the Castle.  There were many more characters milling about as well…not the heavy-hitters like Mickey, Minnie, Donald, Goofy, etc. but the bad-guys from Aladdin, for example,

With the large flow of people going through the Castle, we detoured to Discoveryland (their version of Tomorrowland).  We immediately got in the 10 minute line to get the Disney Fast Pass at Buzz Lightyear.  There was room for improvement here, as Disney World’s Fast Passes were walk up and go.  It was 2.5 hours before we could use the Fast Pass and we were starving, so we headed into the Videopolis.  The food establishments here were great.  The Videopolis was a giant theatre with bench seating in the lower half, and multi-leveled eating area for the top half.  There were giant pull down screens showing old and new Disney clips.  The lights were turned down, the atmosphere quiet, the eating children were mesmerized by the screens, the tired children could peacefully nap in strollers, and the parents could take a mental break from the day.  The fast-food service was the same speed and quality of that in Florida, but the food was much more expensive, a theme that we noticed through Paris in general.

While we continued to wait for the Fast Pass time, Jim and Sean went into Fantasyland for the Le Carrousel de Lancelot and Casey Jr. – le Petit Train du Cirque.  The carousel was much larger than Florida and guaranteed a quick wait in line.  For our anxious little man, this was important, especially where the remaining lines (all without Fast Passes) were just too long.  Jim assured me my toddler loved the children’s roller coaster much more than the pictures showed.  Unfortunately the posted sign said “25 minutes from this point”, which Jim and Sean breezed past.  They therefore should have remained in line for around 20 minutes; however, the line was closer to 45 minutes.  While they rode magical horses and roller coaster hills, I popped into all the little shops.  Much of the merchandise was the same, though there were notable differences where “Paris” and “Florida” specific items were concerned.  There were also a lot of hats, mittens, coats, and blankets for sale given France gets much colder than Florida.

We returned to Buzz Lightyear, waiving away the surprisingly common cigarette smoke.  With two Fast Passes, one of us stayed with the baby while the other went on with Sean.  I asked Jim to look around for park differences, to which he replied, straight-faced “they speak French here”.  *Sigh*  Yet the French speaking Buzz Lightyear somehow surprised and amused me.  The ride itself was very similar in setup, targets to hit, etc.  The laser shooters, though, could be removed from their holsters and pointed any direction the rider could twist.  This is a BIG improvement from Florida, making the ride even more fun!

Given nature’s requirements to use the facilities, we checked out quite a few in the park.  I was a bit disappointed in the cleanliness and odor in most, however the hand dryers were a kick.  It looked like a vertical nail drier you’d use after a manicure, except it was high speed and without that ear splitting shrill of the “regular” high speed driers in Florida.  Plus it entertained the kids waiting in line for the bathroom.

Our last stop was in Adventureland (same as Florida).  This park was by far my favorite.  There were winding staircases and caves to meander around, in or on.  Sean and I wandered up stairs, down stairs, across “shaky” wooden bridges, through caves, and onto balconies overlooking the park.  La Cabane des Robinson (Robinson’s Treehouse) was there, but we had so much fun wandering around Adventureland, that we actually skipped the treehouse!

Sadly the clock was ticking closer our train’s departure time.  We went into Colonel Hathi’s Pizza Outpost for a quick dinner.  The smell of the porch reminded me of childhood camps, and the interior eating area a canopy of leaves, much like you would see at the Rainforest Café.  Since the doors were left open, a couple birds had flown in to make it feel even more authentic.  We just hoped they did not authenticate in our food.

We wrapped up our day buying the requisite holiday ornaments (one is given to each family member annually) in the Castle and headed out of the park.  I wish we had time for more rides, more parks, more anything, but Paris awaited us!  Even looking at the park map now, I see we missed an entire section – Frontierland!  This can only mean one thing…..I’ll have to return.

Thanks Sabrina for a great trip report!  Interested in visiting Disneyland Paris? Contact Castle Dreams Travel for a no-obligation quote!

This entry was posted in Disneyland Paris. Bookmark the permalink.