Posted on June 1, 2015 by DisneyDawnMarie

On Friday, May 22nd the 24-Hour Event to officially launch Disneyland Resort’s Diamond Celebration kicked off at 6am! 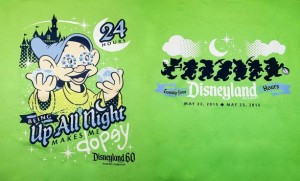 My friend, Tracy, and I met in our Tower’s lobby (Adventureland) in the Disneyland Hotel and 6am and walked through the Grand Californian’s entrance into California Adventure. We both had planes to catch today, but we wanted to head in to see as much of the celebration as we could.

The first thing we noticed were the lines. Not for attractions- but for merchandise. Lines were long in Downtown Disney for exclusive merchandise available in the stores that were opening hours later. Once inside the park there were huge lines that had formed for Fast Passes for the night’s first official World of Color- Celebrate!

We headed to Soarin Over California- which is pretty close to the entrance we used.We could have used our nifty credentials to skip the line- but it was non-exsistant.

To compare with the ride in Walt Disney World’s Epcot- well, I don’t love either ride. Simulator rides are not my friend and both rides are about 3 minutes too long for my motion sickness. 😉 But the first few minutes are spectacular and I always try to open my eyes for the last minute or two as both rides have a pretty magical ending.

Next we did some shopping. We did avoid the shops with lines- once inside we did see a lot of the 24 hour event merchandise was already sold old by 7am! Pins were all gone and the t-shirts were limited.

We decided to hop over to Disneyland park and check out some of the sections we weren’t able to the day before. Disneyland seemed to be a bit more crowded than California Adventure…

But that might have something to do with a number of television shows shooting specials in the park..

We did get to see Mickey in the park with his new outfit on!

As we strolled we passed the Tea Cups- bug difference here than in Walt Disney World? It is uncovered. I cannot ride this ride as I have gotten older. I can barely watch it 😉 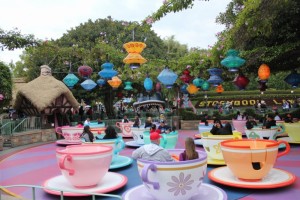 We made it to the back of the park, to one of my most favorite rides, It’s A Small World. This is the very original Walt Disney brought to the New York World’s Fair in 1964. In person, it is simply spectacular. HUGE and far more grand than the one in Walt Disney World. 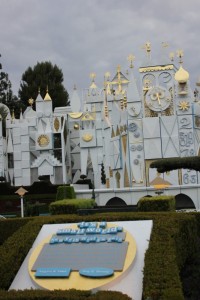 The ride begins inside pretty similarly… 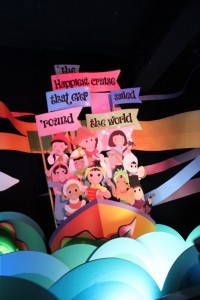 Then the longer ride took a turn and then it became almost a game trying to find the Disney characters not so well hidden along the route! 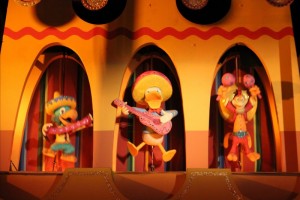 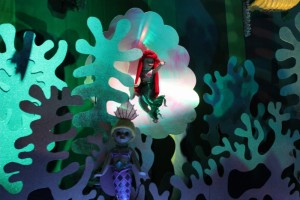 And before I knew it… we were saying goodbye…

Next was Toontown. Now, I will admit to really missing the one in Walt Disney World’s Magic Kingdom. It held so many memories from my first trip as a 15 year old to all 3 of my kids’ first trips. Exploring Mickey and Minnie’s homes was really cool and the theming was incredible. Or so I thought… Disneyland’s version blows Walt Disney World’s version out of the water! When my kids were toddlers, we could have spent nearly an entire park day in just this section alone! 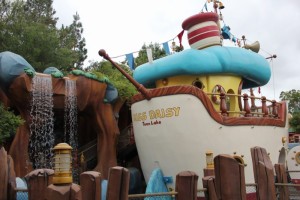 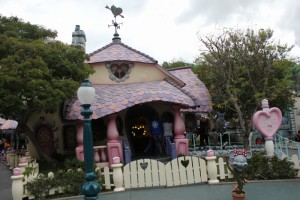 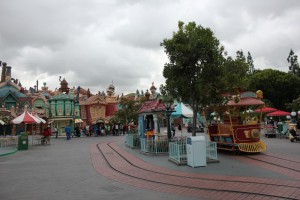 We did ride on one attraction, Roger Rabbit’s Car Toon Spin. This is ADORABLE- it totally immerses you in the movie. In comparison, it is very similar to the Winnie the Pooh ride in Walt Disney World’s Magic Kingdom.

I couldn’t bring myself to do to much more. My kids would have LOVED this section, and I want to experience it with them.

Now it was time to say good bye to my tour guide, Tracy, who led me through the parks like a pro and I know I would not have seen and learned as much if I didn’t tour the parks with her. We strolled into Tomorrowland where you can hop on the monorail inside the park and drops you off inside Downtown Disney (closer to the Disneyland Hotel- and less fighting with the crowd, that has now grown quite a bit). After saying goodbye I roamed around a bit as the crowds were picking up and the lines were growing. 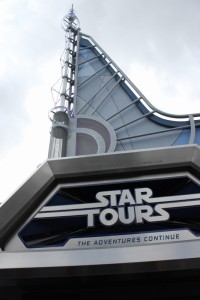 I headed out to the center of the park to take a closer look at the castle dripping in diamonds for the celebration. It really is stunning. 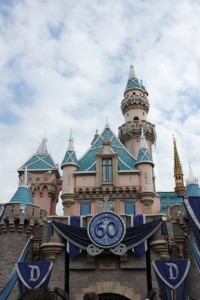 The line for the Matterhorn Bobsleds was nearing 3 hours. I could have ridden again with my pass, but I felt guilty- so I opted for a picture instead in front of it. 😉 I rode it twice and loved it, plus I could have my own souvenir of the day since I couldn’t snag a pin or find my t-shirt size. 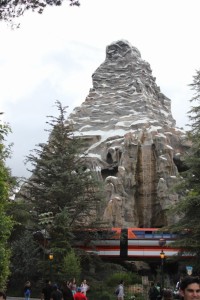 Next it was my turn to hop on the monorail back to the Disneyland Hotel to check out. Waiting for the monorail is pretty neat- not a bad view…

One of my high school friends, and now a Castle Dreams Travel agent, had suggested I stop by Ralph Brennan’s in Downtown Disney if I had the chance for Beignets and by now I was hungry!

I went to their Express and inside was a little tight, but offered quite a bit. 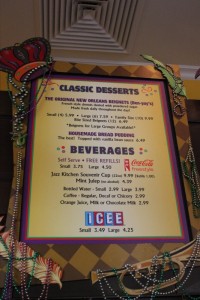 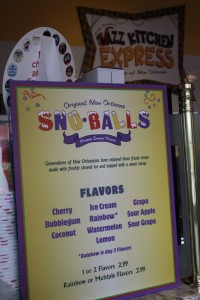 Anyone who knows me well, knows I love my Diet Coke- and here I had so many options! Who knew?

The Beignets were delicious….