Milestone for “On Stranger Tides”

Posted on July 5, 2011 by DisneyDawnMarie

Proving the entire world, not just Disney’s, is in love with The Prates of the Caribbean- “On Stranger Tides,” the fourth film starring Johnny Depp as pirate Captain Jack Sparrow, passed the $1 billion mark at the global box office Saturday, according to an estimate from Disney. Since its release in April, the movie has sold $1.01 billion in tickets worldwide, passing the big milestone this weekend in Japan. “Dead Man’s Chest,” collected $1.07 billion in 2006 making this the second Pirate’s movie to gross over $1 billion. “At World’s
End,” fell just short of the milestone, ending up with $963.4 million in 2007.

“On Stranger Tides” is only the eight film in history to hit $1 billion in ticket sales and the fourth Disney film to do so, joining  2010’s “Alice in Wonderland” and “Toy Story 3.” 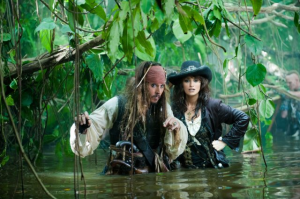 This entry was posted in Mouse Movies, Pirates of the Caribbean. Bookmark the permalink.