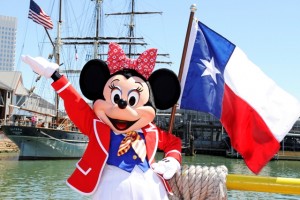 Disney Cruise Line® has opened bookings throughout 2013, as well as revealed where two of its ships will homeport late next year – Disney Magic® in Miami and Disney Wonder® in Galveston!

As the cruise line previously announced, Disney Fantasy and Disney Dream will continue to sail a variety of Caribbean and Bahamian itineraries in 2013, departing from Port Canaveral.

Disney Magic 2012-2013 itineraries currently sailing from Manhattan, Disney Magic will reposition to Galveston in September 2012, offering 7-night cruises to the Western Caribbean through May 2013. The Magic then starts Mediterranean cruises departing from Barcelona – June 1 –  Aug. 31, 2013  and then Western Caribbean and Bahamian cruises departing from Miami – Oct. 20 –  Dec. 30, 2013.

Disney Wonder 2012-2013 itineraries include Alaskan cruises from Seattle and will return to Los Angeles in September 2012. There’s a wide variety of itineraries available on the Wonder as well including Hawaii, Mexican Riviera, Panama Canal and California Coast voyages featuring special offerings from Pixar Animation Studios. The Wonder will also sail in the Caribbean departing from Miami – Dec. 23, 2012 –  May 2, 2013. Alaskan cruises departing from Vancouver on the Wonder begin on  May 27 –  Sept. 2, 2013 and Western Caribbean departing from Galveston — Sept. 28 –  Dec. 28, 2013.