Models of the villas at the soon-to-be-opened Aulani, Disney’s newest Vacation Club resort located in Hawaii’s Oahu, have opened in Walt Disney World and Disneyland Resorts.  The Walt Disney World model can be found at the Preview Center at Disney’s Saratoga Springs Resort and Spa. The Disneyland model unit can be found at the Disney Vacation Club Preview Center located between the Disneyland Hotel and Paradise Pier.  Aulani is scheduled to open on August 29, which is already sold out.

Full scale studio units measure 356-square-feet and the one-bedroom unit measures 756-square-feet (sleeps 5)  and are on display for guests to see and walk around. Aulani will offer two-bedroom units, as well as a Grand Villa that sleeps 12.  The villas feature hidden Mickeys and several Disney touches throughout. 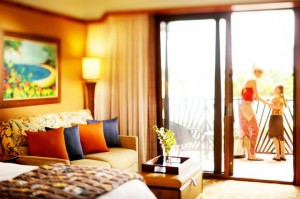 This entry was posted in Aulani, DIsney Vacation Club. Bookmark the permalink.