Updated list of closures and rehabs in Walt Disney World

Posted on September 30, 2015 by DisneyDawnMarie

Are you planning a trip to Walt Disney World? You might want to check this list before finalizing your plans…

In the Magic Kingdom, the Liberty Tree Tavern and The Diamond Horseshoe are both closed now but are scheduled to reopen on November 19th. The Walt Disney World® Railroad and Disney’s The Magic Behind Our Steam Trains Tour will both be suspended on October 12th and will resume on November 20th. Peter Pan’s Flight will also be closed from November 2-7th.

In Epcot, the Re-Imagination of Norway’s Maelstrom in World Showcase is ongoing and is scheduled to reopen the end of April 2016.

In Animal Kingdom Park, Primeval Whirl and Pizzafari are both closed and will reopen by mid-November.

The Walt Disney World® Resort Monorail System is undergoing refurbishment through the end of the year and may be on modified service and/or routes. If Guests plan to use this form of transportation during their visit they should check to be sure of the best option available on their day of travel, as alternative transportation options will be available.

All Star Sports Resort’s Grand Slam Pool will be closed October 26th through December 18th. Pop Century Resort’s Computer Pool will be adding fencing and gates around the pool. The pool will remain open during the project but Guests will see contractors and equipment in the area through October 23rd.

Caribbean Beach Resort’s main bridge going from Aruba and Jamaica to Old Port Royale will be closed until November 26th. Guests may take a shuttle, internal van, or boat from Aruba to Bike Works. Coronado Springs Resort’s Fitness Center, Salon and Casitas Leisure Pool are all closed for maintenance until October 19th. During this time, Guests can continue to visit the feature pool and the other two leisure pools at the resort. Additionally, a temporary fitness center will be set up for Guests in the Casitas area. Port Orlean’s French Quarter Kiddie Pool will reopen December 23rd.

Animal Kingdom Lodge’s Uzima Pool & Area will be closed December 14th-16th. The Boardwalk Inn has ongoing exterior repair and painting through the spring of 2016. Both the Polynesian Village Resort and the Wilderness Lodge are undergoing some general construction. During this time, Guests will observe construction taking place and certain pathways and buildings may be unavailable. At the Polynesian Village, the East Pool is still undergoing some work but will reopen early 2016. At the Wilderness Lodge,  The Hidden Springs leisure pool area (the leisure pool at The Villas at Disney’s Wilderness Lodge), resort beach, playground and Recreation fire pit will be unavailable until 2017. 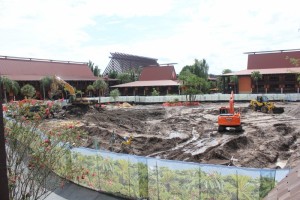 Due to heavy roadwork, expect delays on Buena Vista Drive near  the NEW Disney Springs. It is recommended that Guests use complimentary Walt Disney World Resort transportation from Parks and Resorts to Disney Springs and plan to arrive early for reserved dining and entertainment experiences. Loss of parking lot Entrance 2 to Guest/Cast traffic and associated lots A-G in preparation for the construction of Town Center and the East Garage is expected through July 2016. Fulton’s Crab House and Planet Hollywood will both close Jan 1st and reopen spring 2016.