Visiting Austria and Czech Republic with Adventures by Disney

One of Castle Dreams Travel Planners, Jennifer Leon, traveled to Austria and the Czech Republic with Adventures by Disney and shared her review and some pictures of her trip with us:

Every other year over the last decade, my sister and I have done an adult
father/daughter trip. As the designated trip organizer, I’ve tried to choose destinations
that appeal to all of us addressing our varying interests including history, art, food,
adventure and of course shopping! We’ve traveled throughout England, France, and
Italy. It was our most recent trip through central Europe however, that opened up a
whole new style of touring that I would have never thought of on my own thanks to
Adventures by Disney® .
Over the last several years, I had been wanting to take an Adventures by Disney® tour. So
many features appealed to me – the concierge service by the two Adventure Guides on
each trip, the amazing accommodations in each city, the all-inclusive style of touring
including meals, transportation in and around the destinations each day as well as all of the
VIP tours (many led by expert local guides) at each of the daily sites. However for this trip,
it really came down to the date on which we were all available. Since we weren’t traveling
with children, we decided that the adult-only tour was the way to go for us (usually offered
for multiple dates at the beginning and end of each season in each location). So off we
were to plan our adventure to central Europe – more specifically, the Czech Republic,
Germany, and Austria.
We arrived in Prague a few days prior to the tour date to adjust to the time change as well
as to spend more time getting to know Prague more intimately. It’s an extremely easy city
to navigate either by walking and/or using the public transportation system of buses and
subways. Most people there speak English so there was no language barrier most of the
time. Prague, the capital city of the Czech Republic, is known for many things surrounding
music – many composers spent lots of time there – Dvorak, Mozart, Beethoven, and
Smetana. Concerts are frequently offered throughout the city. We also noticed several
street musicians to our delight that just added to the city’s charm. It has one of the best
preserved old towns in all of Europe – virtually untouched during World War II. We
participated in a few walking tours to really immerse ourselves into Prague’s rich history.
Starting with a general tour through the old town square, Jewish Town, and over the
Charles Bridge, we then toured the Prague Castle at night (quiet, peaceful and so beautiful
all lit up). On the day we were to meet our Adventures by Disney® group, we got up early
and did a tour specifically focused on the history of Nazism and Communism and their
presence in Prague during and after the 2 nd World War.
Finally it was time to meet up with our group of 26 at the Prague Marriott hotel – the
starting point of our adventure.

Day 1
After checking in, taking a few pictures and meeting our adventure guides Stephanie
and Natalia, we were ushered into a room along with all of the other travelers and
introduced ourselves before heading out to our first dinner. The enthusiasm and
excitement was at an all-time high knowing we were all embarking on something special! After dinner we headed back to the hotel and turned in early because from this
point forward our days would start out by 8 am and finish up at 8 pm each evening. 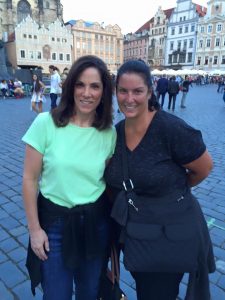 Day 2
We only had one day to tour Prague with the group (one of the reasons we had decided to
arrive early). In addition to the local sightseeing, we spent some time at the National
Marionette Theater where we caught a show and learned about the art of puppetry
performances. We then headed to a special workshop where we made our own
marionettes that we were able to take home at the end of the trip! 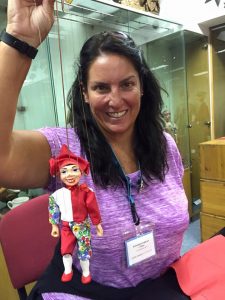 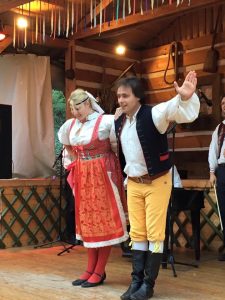 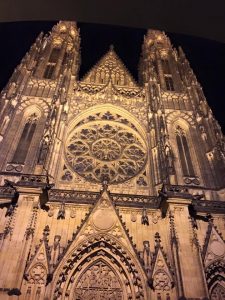 Day 3
Off to Czesky Krumlov! This amazing old bohemian city was settled in the early 1200’s.
A storybook castle towers over the beautiful town filled with cobblestone streets and
colorful buildings that house vibrant flower filled window boxes. It was as if we were
walking through a Christmas village complete with its own gingerbread house! Our
Adventure Guides provided us with advice on shopping, dining, and any other interests
we wanted to pursue. They always made us feel important and were always willing to
go the extra mile to assist us. While it may seem minor, my father had asked if they
knew where he could find an English newspaper (the New York Times) and before we
knew it, they had secured one and hand delivered it to our room. These little acts of
kindness really showed me why this company is one of the best in the industry! After a
few hours, we boarded the bus to move onto our next hotel in Berchtesgaden,
Germany, about three hours away. 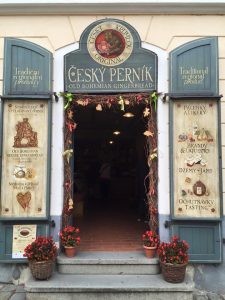 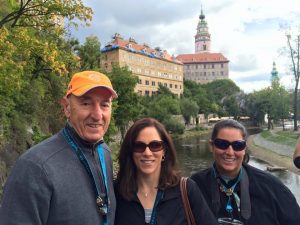 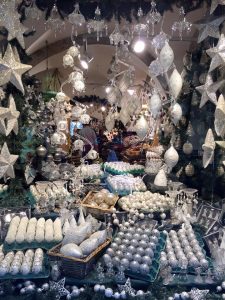 Berchtesgaden is a small historic picturesque town located in the southeastern section
of the German state of Bavaria (in the German Alps). It’s located on the border of
Austria. We checked into the Edelweiss Hotel, a new addition to the hotels commonly
used for the Adventures by Disney® tour group. Dinner was on our own the first night,
though many of us wound up together as we had already bonded as a group.

Day 4
After breakfast, we headed out for an amazing hike up in the Alps to the only ice cave in
all of Germany. With no natural light, our only way to see was to carry gas lamps.
Following our own private guide, we traversed up and down 1700 steps throughout the
cave. We gazed upon the most spectacular ice formations – they looked very much like
the stalagmites and stalactites found in limestone caves. Words cannot describe the
remarkable scenery high above the mountain path as we walked along the trail.
For lunch, we were brought to a restaurant halfway up (or in our case down) the
mountain that was also accessible by cable car (sort of like a gondola on a ski slope but
steeper). We dined on traditional Austrian/German food as we relished the view of the
mountains where the Sound of Music was filmed during the early 1960’s. From lunch,
we then headed to Hohenwerfen Castle for a tour and falconry show. This medieval
castle is over 900 years old! The art of falconry is the ancient sport of hunting using birds of prey. Majestic bald eagles, hawks, and falcons performed high above us during
the scheduled show. An experience I’ll never forget! 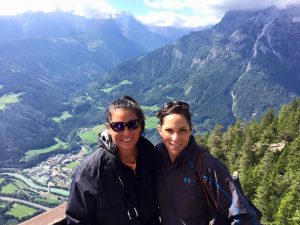 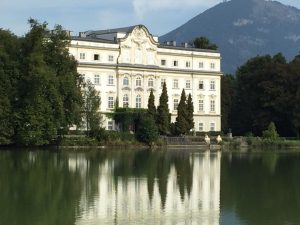 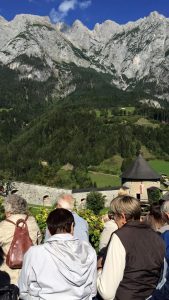 Day 5
Salzburg – birthplace of Mozart! Horse drawn carriages, chocolate shops, and
Christmas stores surrounded us as we meandered through the city filled with medieval
and baroque architecture. We visited many locations featured in the Sound of Music –
the gazebo where Rolf and Liesl danced, the terrace overlooking the river where Maria
and the children fell in water, the fountain where Do Re Mi was sung by the children as
they ran around the circular edge. Our local guide was a relative of the Von Trapp family
– we were mesmerized by his stories and little known facts about the real Von Trapp
family. Dinner was amazing that night – we were treated to a private cello concert
featuring music by Mozart during the meal. 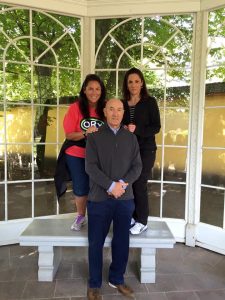 Day 6
On this morning, we moved onto our final destination – Vienna. We checked into the
opulent Ritz Carlton hotel just down the street from St. Stephens Cathedral. While in
Vienna we were treated to a tour of the stables of the famous Spanish Riding School
which houses their regal white Lipizzan horses. Next was the massive Schonbrunn
Palace that took multiple centuries to complete. After the Palace, we participated in a
group lesson to make apple strudel and pretzel making.
We had the unique opportunity of visiting the oldest zoo in the world after hours as well
as enjoying a private dinner inside the conservatory at the center of the zoo. 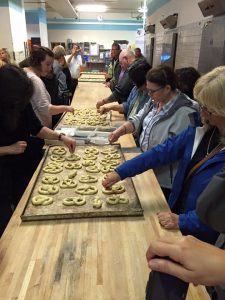 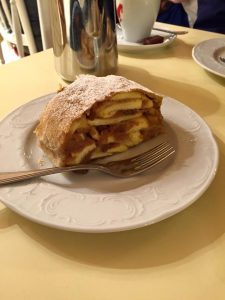 Day 7
Our trip now was coming to an end. At our farewell dinner, we all had an opportunity to
reflect and speak about our favorite moments of the trip. I’ve summarized the entirety of
it – it seems almost impossible to detail all of the wonderful moments, interactions, and
experiences that were made possible by our adventure guides and Adventures by
Disney®. There were times that we had time on our own to shop and explore which we
appreciated. It was truly an amazing journey I was lucky enough to enjoy and look
forward to my next trip one day with Adventures by Disney® ! 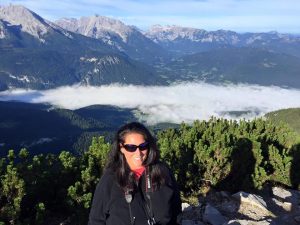 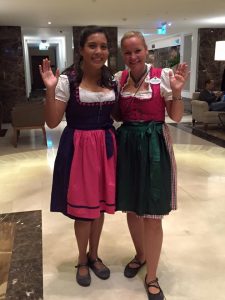 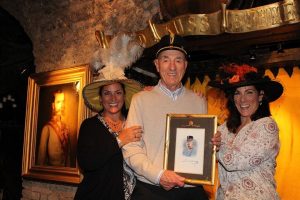