Posted on April 9, 2015 by DisneyDawnMarie

Mickey’s Not So Scary Halloween Party is a great way for you and your family to have a unique experience in Walt Disney World while celebrating Halloween safely. The park is open only to those guests who purchase the Not-So-Scary tickets. There is a bit of a crowd entering the park since it is only open 7pm-12am, but you can enter as early as 4pm with your party tickets to avoid the rush. We received event wristbands and trick or treat bags upon entering the three times my family attended the party (the last being in September 2013) and then the entire Magic Kingdom is open for your enjoyment. If you are going for the rides then you will luck out because there is no wait for majority of the rides once the party begins.

You will find all the Disney characters in their festive attire for the party, as well as many party goers! There have been dance parties in Tomorrow Land and Fantasyland is prior years, which are a lot of fun too. There were even some characters out that you don’t normally get to get pictures with such as all of the Seven Dwarfs. We have also been lucky enough to see Cinderella in front of her pumpkin coach as well during the party. And there are plenty of villains out for pictures and autographs as well.

My family has felt The BEST part about this event was the parade. It starts with the headless horseman on a black stallion galloping through the parade route! They host 2 parades throughout the night. If the little ones can stay awake I suggest the 10:30pm parade. It is much less crowded than the 8pm parade. HalloWishes is a special fireworks show just shown on party nights, which is set to Halloween music and is truly spectacular. You can see this show at any point inside the Magic Kingdom.


In front of the Haunted Mansion, there is a unique spot to have a picture taken in front of the ride as well, with a ghost or two. Space Mountain turns into a spider web with a giant spider on it and ghosts popping up and just as quickly disappearing on Main Street. 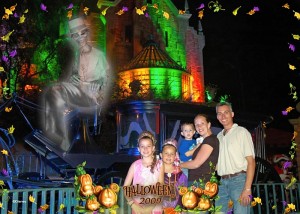 Tip: Make sure you pick up a map even if you know your way around the park. You’ll need it for Trick-or-Treating checkpoints. During the parade they hand out chocolate candy too!