What is the best age to bring your child to a Disney theme park?

Posted on November 2, 2015 by DisneyDawnMarie

What is the best age to bring a child to a Disney theme park? That’s a loaded question. Some wait until their kids “can remember it”, others wait until hey can afford the trip of their dreams, others simply just don’t wait at all… because time doesn’t stand still.

My parents waited to bring their 3 kids. They waited so long, my older brother had zero interest in going. At 20 years old, he was too cool to go on a family vacation to Disney World. My younger brother and I at 15 and 13 had a great time without him, but truth be told- we had been begging for years to visit Mickey. My parents went all out- and we LOVED staying at Disney’s Contemporary Resort for a week. I remember moments of that trip back in 1989 as if it were yesterday.

My husband and I brought our oldest daughter to meet Mickey when she was 15 months old. We spent a few nights at Disney’s Vero Beach Resort and then a few at Disney’s Polynesian Resort. Ironic, I was 15 YEARS old during my first trip. It was a magical trip- we were upgraded to concierge level, enjoyed the lounge for breakfast each morning before taking the boat across Bay Lake to the Magic Kingdom. We ate in Crystal Palace and Cinderella’s Castle. We rode the Walt Disney World Railroad and watched the Country Bear Jamboree more times than I could count. We had a fabulous lunch at Tony’s Town Square Restaurant before heading back home on September 9, 2001 (days before the world changed forever on September 11th). That trip was stressful, as is everything you do the first time (our first family vacation as a family of 3) but magical at the same time.

Our second daughter was only 4 months old when she went to Walt Disney World for the first time. We had planned a trip for September 2002, but then I became pregnant- and that was my due date’s month. So, we took a trip in April of 2002 and then again in January of 2003. That trip in January was a big one- we stayed in a 3 bedroom villa in Disney’s Old Key West Resort as our now family of 4 was traveling with my younger brother and his now wife plus my mom and her best friend. Our group caught a terrible stomach bug during that trip- and having this space with a kitchen and laundry facilities was such a luxury. Also during this trip, our family was chosen to open the Magic Kingdom one day. Our daughter’s very first smiles were strolling down Main Street USA in her stroller. Again, it was stressful, but pure bliss too.

Our son was the oldest at 18 months old when we headed down for our stay at Disney’s Wilderness Lodge. Our daughters were 8 and 6 years old now (some might even argue those ages are too young to bring as well), my husband and I were more relaxed- and this trip was a breeze. We ate with every character we could, went on every family attraction and even enjoyed some down time at the pool. We had also waited to have his first, professional, hair cut on Main Street USA’s Harmony Barber Shop with Michal- a tradition as the girls’ first were with him too, with Daddy right by their side (Daddy got painted and pixie dusted every time!). There were more giggles and singing on this trip then we have had before or since- a memory I treasure. 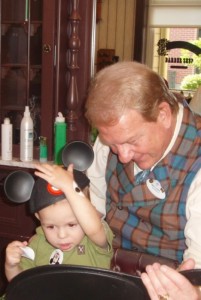 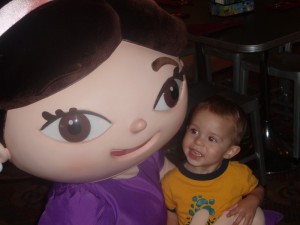 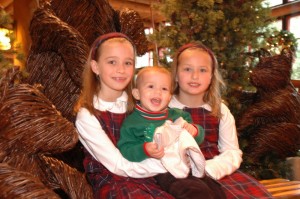 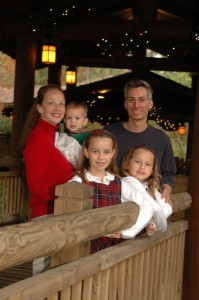 Now there are so many vacation options you can choose from at Walt Disney World and Disneyland that it can be affordable to have a memorable vacation with your family- with the right planning involved. There are resorts for every budget and the right vacation planner can help your trip become what you had always hoped, including deciding on the best park ticket options, dining plans (at Walt Disney World), and even when is the best time to go and for how long should your stay be.

So- when is the best age? Well, here is no magic answer here, every age is the best age. Every trip has amazing memories you will hold on to matter matter how old or young you are. Does my daughter remember her trip when she was 4 moths old? Of course not- but I do. So does her Father, Aunts, Uncle and Grandmother. She also spent hours outside each day in the sun- which wasn’t happening at home during January in New York. None of my kids remember their first trip as I remember mine because “I was old enough”- but we all came home with a sense of wonder, and a bonds that were cemented during those trips. Parents who weren’t busy with their jobs or responsibilities that their entire attention could be focused on their kids. Being silly with the characters, singing a familiar song, holding hands as you walk along the paths to someplace new, or screaming on a roller coaster- that’s what memories are made of, and it doesn’t matter how old you are.

This entry was posted in Disneyland, Uncategorized, Walt Disney World, What We're EARING. Bookmark the permalink.